Since I had a lot to say, and always do… I had to cut the writer short last time… & since he says it so well, here’s the rest of what he had to say regarding colour & genitals (in case you missed part one of this post, you can read it here)

The modern recourse is to blame everything on colonization and cultural imperialism, but equating feminine beauty with fairness is not a post-colonial phenomenon, not even if we look at imperialism before the industrial/capital driven one in the last few centuries; it seems pervasive in many eras and cultures, even within predominantly ‘white’ cultures themselves. Not all white women have pink genitalia, but that seems to be the standard for them as well, if the internet and pornography and feminist critiques are anything to go by.

Moreover, there wasnt just an internalized racism at play here. These men did watch pornography but did not hold the same colour standards for themselves (after all pornography involves both sets of genitalia). In fact, when it came to the penis, colour paled in comparison to the importance of size; where both pornography and popular perception (and perhaps even empirical evidence, I am no expert) suggests that ‘black’ people have the biggest penises.

Penises become a source of great envy and personal complexes for men, and despite the similarly prejudiced notion that the colour black is not aesthetically appealing, it still becomes the ideal because of the sheer power and prestige associated with magnitude.

In a weird way, one which resists reductions to racism or cultural colonization, the black penis and the pink vagina seemed to be the genital ideals.
* * *

The fact that we have ‘genital ideals’ is pretty surprising for me really… its not an issue I had given much thought to prior to this brown vagina conversation. Of course I am familiar with mens’ obsession with penis size, but anything other than that had not crossed my mind. I wondered if black people had the same colour prejudices when it came to genitals as brown people did… did black guys expect black girls to have pink vaginas like brown guys supposedly expect brown girls to have? I decided to ask an African-Canadian friend.

Of course by now, none of my friends are surprised by the bizarre questions I ask or types of conversations I have with them. I am lovingly called a perv… but clearly they aren’t familiar with the true definition of that word :P

After much beating around the bush and uncomfortable answers that were going nowhere, my friend ‘B’ finally decided to open up:

B: ok, the first time i saw a dark vagina, i have to admit i didn't know what to think, i had thought they were all light coloured. so i can see where they (he’s referring to the group of men mentioned in my previous post about this topic) get that idea from, and just urban myths take it from there, if that’s what everyone is telling you what else are you supposed to think? I had the benefit of not knowing anything, so i was a clean slate

B: it was an unconscious assumption

me: yeah but if u hadn’t thought about it… why had the picture of a light one popped into ur virgin brain as the standard?

B: because thats all that i had seen

me: but that was ur only source?

me: and as a black guy it didn’t occur to u that black girls may not have vaginas that looked like that?

B: lol, u overestimate a man's ability to think clearly in a sexual situation

B: the only time a man's able to have any type of rational thought at that point is if he’s having sex with a girl that he has no feelings for whatsoever, like a prostitute, like i said, afterwards you are able to realize, but at the time? not so much

B: and following this post, you may want to do another about girl’s reactions to un/circumcised penises

me: I’d do one, but it wouldn’t really apply to my readers since most of them are Muslims, I assume all the men are circumcised. So there wouldn’t be much variance in opinion.

Of course, he’s not a dickwad, so he doesn’t have idiotic thoughts like ‘dark vaginas are loose’ or ‘dark vaginas give you STDs’ – for him it was a simple case of not thinking it through (apparently they can’t rationalize when aroused..heh… who’d a thunk), and expecting to see what he had always seen on screen. For the Pakistani’s previously mentioned, there was value placed on the lightness of the vagina. There was prejudice and disgust….

I conclude that a lack of exposure and (sexual) education/awareness are the reasons for difference in perception between the Pakistani men and my friend B. Despite the fact that B was taken aback because his expectations had been set up by pornography, once his logic kicked in… a variety in colours made sense to him. And that’s really all it is. People come in different colours, so do penises… then why not vaginas?

As I’ve mentioned time and time again. Pakistanis need more Sex Ed.
One basic tenet of sexual health I’d like to emphasize is: use a rubber people! I know of waaay too many Pakistani men that cheat on their wives with random women/men, and don’t even have the decency to wrap it up. Not only do they risk unwanted pregnancy…. But they bring home diseases to their wives. Sad part is, a lot of these women know what’s going on but are afraid to question their spouses about it.

So one step at a time towards sexual health. If we can’t teach these kinds of men to respect women yet. At least we can make them aware about the risks of unprotected sex. 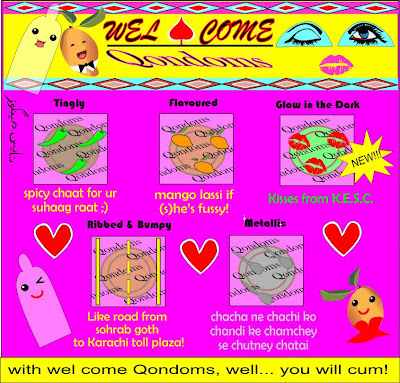 Do you think education is important, when it comes to something like sexuality?

Ayesha, Female, 28
Immensely. It is a far more important aspect of our identities and perceptions of self than are religion or nationality or ethnicity. Under no circumstance should we internalize hatred or derision based on our sexuality, and that can only come through understanding and accepting yourself for what you are.

Layla, Female, 19
It is yes, but I’m still deciding on the right age to be educated. It all depends on the individual and how and what they do with the knowledge.

Ambreen, Female, 28
i think its extremely important.... its ur body u should know what u like and what u dont like

Mariam, Female, 26
Absolutely…its absolutely important…being educated about something makes it a little more real and less perverse…our country needs to do that desperately… because right now sex is seen as something sooooo dirty at the grassroot level…awareness on the topic is so flawed… its leads to a lot of frustration in our population…. Not just the men...the women too….this frustration leads to a level of sickness in the men especially in our country, that actually makes me want to kill myself…from time to time…. – I have been at the receiving end of some of these frustrations…and it really makes you want to … even if not kill yourself… kill them! It makes you want to completely remove yourself from it. I do not consider myself a part of this country for this reason essentially! Fine we have other problems… but this is not something that can ever be a part of my reality…and I think that its going to drag our country down…as it has. It can change… but its probably gonna take close to a hundred years…and I don’t have that kinda time. And this book… will have some effect… but generally the people who will end up reading this book will probably already be on the right track or some form of the right track….i think the people im probably talking about …which make up the majority of the sickness of this country…will probably not come across this book… or if they do…will probably not pick it up and read it. They’ll regard it as either rubbish or trash or promiscuous or whatever…so I don’t think it will change anything at the grassroot level.

Fatima, Female, 25
I think its something that lacks greatly in our country and it needs to be done because we are sexual beings…I grew up with confused sexuality… I didn’t even know what side of the sexual spectrum I was on – now I’ve figured it out... and my theory is that the whole world is bisexual…just to different degrees.

Zobia, Female, 22
Absolutely! I think it’s really ridiculous how they don’t teach sex ed in Pakistan. It is extremely important in my opinion and can prevent disease, unwanted pregnancy and eliminate the completely unaware and unknowing attitude our people have towards something that is a part of everyone’s lives.

Rabia Female, 23
Yes definitely. A lack of education on sexuality is what has caused it to become an increasingly ‘unmentionable’ topic. Raise the issue, address it in the right manner according to religious/moral guidelines if you’d like, but discuss it – spread awareness!

Farah, Female, 29
Yes – I think so . I’d love to help write a curriculum for sex-ed in Pakistan.

Maliha, Female, 21
I do. I don’t know what the deal is with people who think sexual knowledge is all inborn. Anyone who thinks that should meet the couple one of my friends encountered in her clinic – they’d been doing anal sex for years and actually came to the clinic for infertility issues – when they examined the woman it turned out she was still a virgin. They’d simply been doing it wrong. Methods aside, its absolutely necessary to teach safe sex practices. That can be done easily in a normal school background. But something else that needs to be taught and needs a gentler setting such as the home is simply about how to respect one’s own body and be aware of it – as well as how to respect other people’s bodies and privacy…too little of that is done, which is why so many people end up confused and weird and may even be molested without understanding what’s happening.

Mahreen, Female, 26
To some extent, yes. Having a broader, more liberal worldview may make you far more open to different experiences, but then again I’ve seen lots of uneducated people having uninhibited, kinky sex.

Next time, what my male interviewees have to say about education & sexual awareness.
Posted by Eiynah at 12:35 PM