I thought I’d have some fun with IDW/Classical Liberal Halloween cards. There's so many more I could have done, but alas...I didn't have that much time. If you want to join in the fun...make one and tweet it to me @nicemangos :)

Anyway - a clarification for the pedants: I use the terms IDW/Classical Lib to describe them, their dogmatic fans and the figures who hover around them....the Quillette, 'But what about anti-white racism' types... 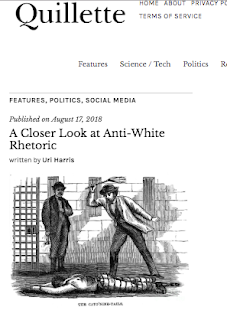 ...So it's not limited to the amazing bigbrained peeps mentioned in Bari Weiss' LOL-worthy article (featuring pictures of them jerking off trees or hiding in bushes)....you know the one i'm talking about. 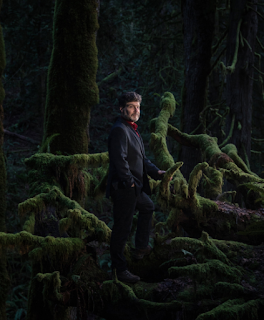 Why is it important to mock this pretentious circle-jerk as often as possible, you ask? I'll give you a quick rundown, even though I could write a bit on each central figure here, I just don't have the time to delve in that deep at the moment.

Simply put though, its because they're pushing some dangerous ideas and providing cover for dangerous people. In a new, repackaged & polished format this isn't immediately recognizable to some.

They're driven by a strongly anti-left agenda, while often simultaneously claiming they are on the left ...or at least ‘not right wing’ (though they do have their more open RW types like Ben Shapiro/JBP, but I believe even Peterson has denied being a conservative),

It's this dishonesty and attempt to mask what they're really pushing for that concerns me.

I find it's almost better to deal with an open right wing, anti-immigrant type than to deal with a sophist covering their tracks every step of the way, leaving room for plausible deniability, while being an apologist for similar issues.

In this era of a resurgent far-right and rising hate crimes.... this 'totally-not-right-wing' crew still focus their energies on the left while downplaying the dangers of the far right. 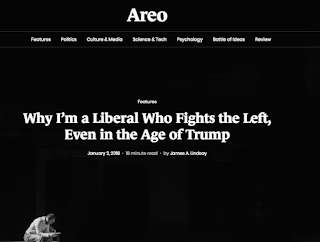 Anything random campus SJWs do will be an outrage and indicative of the 'rot on the left'... but when it comes down to calling out Milo Yiannopolous, even after he's exposed for being a pedophilia apologist...there will be excuses.... deflections - even if it means pointing the finger at fictional plays and then realizing that your example is ridiculous. 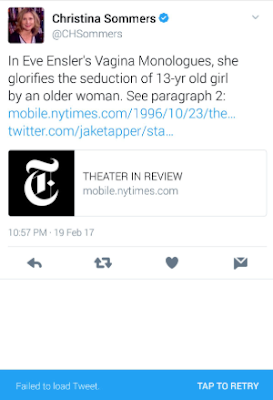 There will be reminders that Milo was smart and charismatic (they'll say they are no fans, of course!)...but even in the face of him defending sex with minors there will be 'he doesn't deserve this... let's wish him well and hope he can leverage his charm into a new life' type apologetics.

I remember this too. Cringe.
I genuinely don't understand how u can have this attitude towards some of the worst ppl around, but feminists and campus sjws just don't get that kind of sympathy and understanding.
https://t.co/U3WkJ0SwUE pic.twitter.com/zcNjk0CiwP
— Eiynah --- (@NiceMangos) January 12, 2018

Or at best, they'll say Milo can't be far right because he's gay and flamboyant, Jewish and has a black boyfriend . They'll dismiss him as a mere troll...justify his outrage at the 'liberal media bias'...and complain about his Twitter Ban. Or defend him using Breitbart articles. 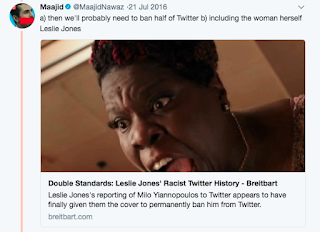 They'll be happy to threaten to quit Patreon over banning White identitarian Lauren Southern...meanwhile portraying her to their massive audiences as a mere 'conservative journalist'.

When it comes time to call her out, or state a solid opinion on an obvious extremist like Robert Spencer or... Tommy Robinson - if it's not blatant apologetics (like Rubin's where he literally positions Tommy as *Extremely Moderate*,


...the best you'll get is a shrug and a claim that they 'just don't know enough' to make a judgement on him (while they retweet flawed defences of him).

Even in the wake of serious incidents like more than a dozen pipe bombs being mailed to Trump’s critics their priorities do not shift from the dangers of sjws and The Left.

They will minimize RW terror threats even, referring to them as "minor events"/a few malicious jerks...


Once again the press gets gamed, giving saturation coverage and agonized commentary to a minor event. It's not major news that a country of 325m has a few malicious jerks who (correctly) anticipate 15 minutes of notoriety with a vindictive stunt. https://t.co/zXnBJXCqdB
— Steven Pinker (@sapinker) October 25, 2018


But compare that with the wording you often see about The Left, 'Devouring it's Children' .. oh nooo: 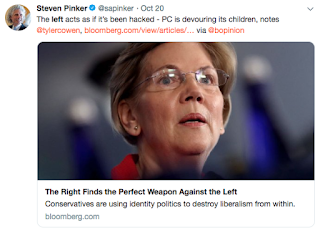 If not that, there's a general AllLivesMatter-ification, that really endears them and makes them very useful to the far right 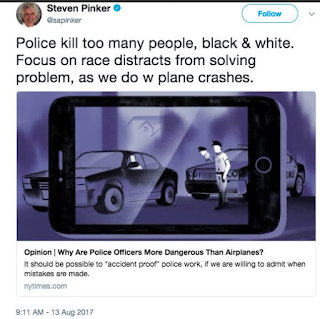 You kicked up a lot of dust, tried to tie me to Trump, to Alex Jones and to various claims that I've never made, but in the end you avoid my only point: If we make it costly to consider conspiracy, we hand power to those who would conspire, placing the honorable at their mercy. https://t.co/dvB1Mi6pg5
— Bret Weinstein (@BretWeinstein) October 26, 2018

Only the most Rational takes from the IDW, I tell ya. And while we're on the topic of conspiracies...who can forget the classic Rubin moment, when he claimed there's a necessary space for Infowars:

Those that follow this cheerful group closely, know full well how often they whitewash troubling views/figures ...or delete criticism of them if it happens to come up. 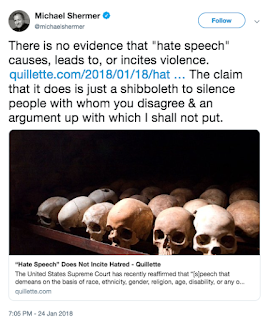 It’s about joining hands with those radicalizing young men, with those who fear monger about immigrants, and the whiteness levels of London being too low (aka the far right conspiracy of 'white genocide') - its about giving these things more credibility in the mainstream, and helping to justify and rationalize people’s bigotries while making big bucks.

It’s about amplifying the "#metoo has gone too far" message, about how women have it better and if they don't have power it's because they don't want to have more power, 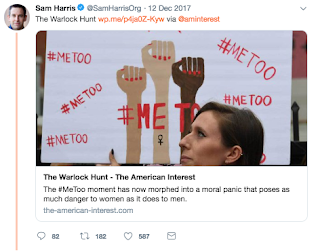 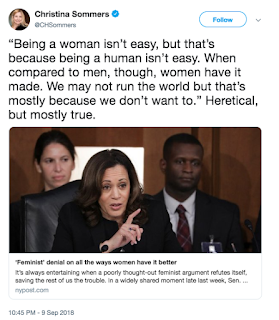 Support for publications like Quillette who publish garbage that’s indistinguishable from salafist mullahs at times, is not hard to come by in these 'Dark 'intellectual' parts of the web'. 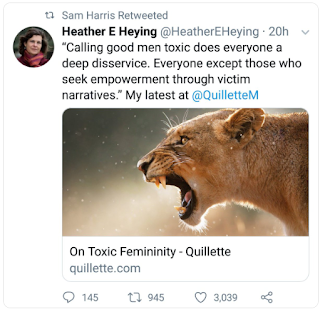 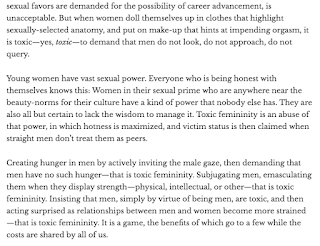 What these IDW-type RationalSkeptic movements are about is pushing back against those who want equality, and those who want to minimize racism and sexism.

It's about the maintenance of social hierarchies and the status quo. 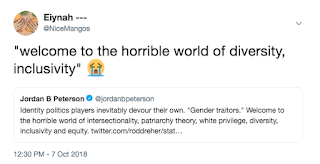 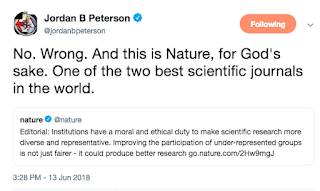 They often find a token minority person to champion 'controversial' views, so they can serve as a shield from criticism and accusations of bigotry. 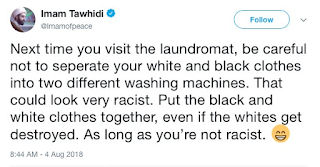 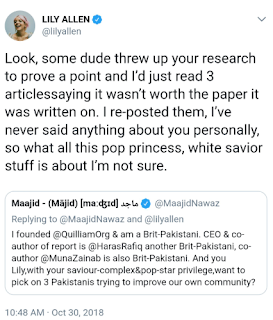 Its about criticizing people who use the word racist, but using it happily yourself whenever it suits you. 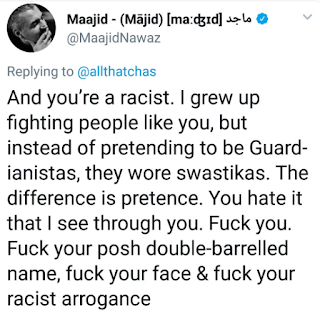 Casually accusing groups of people of having the intellectual and moral integrity of the KKK even,

It’s about discrediting the media as Rubin does with his Infowars support and CNN/MSM hate, and about discrediting entire educational fields too (Peterson has declared entire fields of study 'corrupt' because of postmodern neo marxism)... all the while, these heroes pat themselves on the back for being the Rational ones ...having 'tough conversations' and tolerating differing views (while tossing out lawsuit threats like halloween candy, of course).

It's about downplaying actual sieg heiling white supremacists while claiming that the term Nazi has lost meaning. 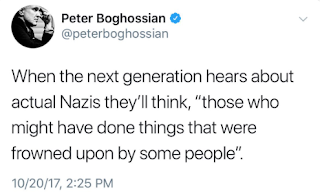 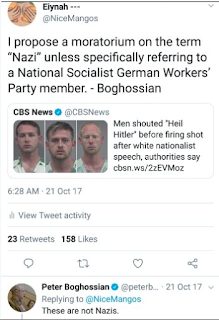 I mean it's exhausting just pointing out the endless contradictions, holes and dangers of such self-important groups.

These are the threats we recognized in islamist sanitizers posing as progressive...*immediately* in ‘skeptic circles’ but unfortunately...this crew has managed to convince many 'Rational', atheist-skeptic types that re-energizing conversations around ‘race science’, traditional gender roles, and anti trans sentiment from a ‘respectable, 'this is just science/rationality' angle is indeed ‘real liberalism’.

So....this, dear readers, is a very quick rundown of why I think it’s incredibly important to mock and expose this group pushing alt lite/right adjacent talking points into the mainstream. Especially in today's political climate.

This is where the real threat of literal regressiveness lies, currently - and I think we should do our part to push back.

Now that that's out of the way....here are some lighthearted Halloween cards, meant to be viewed with that perspective in mind (all that for 4 illustrations, I know! I've just had a lot I needed to get off my chest about this subject for a while): 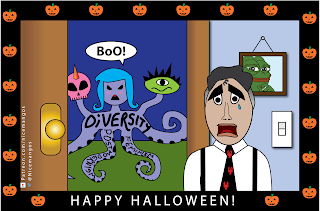 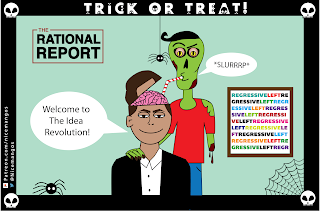 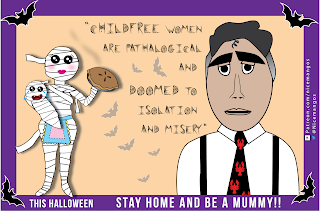 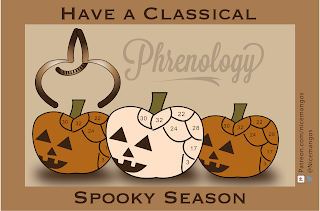 A huge thanks to all my patrons who support my work. Without you, this isn't possible. These kinds of blogposts take forever to compile. If you enjoy this or my podcast, please consider supporting via Patreon

A shoutout to new-ish Patrons who are owed a mention on the blog: Mish, Karl N, Shakhthi, Ernst & Margeaux. You guys r the best!