So..... much more interesting conversation has been generated from the last post. I'm glad that more of you are participating and letting your thoughts be heard :) Its truly the best way to learn more about topics unknown and un-discussed.... for example one of my commenters wrote on the last post;


"Also, it [Islam] doesn't really oppress female sexual desires. If anything, it protects females by prohibiting men from sex during periods, which doctors today say would be harmful for females."


and then followed up with:


"As for proof, there are doctors you can talk to about sex during menstruation. I have asked doctors, that too female ones about it and the majority hold the view that its not safe, irrespective of how horny they might be feeling. Now to give you some "proof", "A woman's risk of sexually transmitted disease and infection is higher than normal during this time because the cervix opens to allow blood to pass through. Unfortunately, this creates the perfect pathway for bacteria to travel deep inside the pelvic cavity. A woman is also more likely to pass on blood-borne diseases like HIV and hepatitis to a partner during her period, and she's more likely to develop yeast or bacterial infections because the vagina's pH during menstruation is less acidic" as taken from http://www.everydayhealth.com/sexual-health/101/specialist/berman/sex-during-period.aspx ."


But of course, like I said to him us humans can manipulate facts to suit our needs... we can just pick and choose what to point out, if it strengthens our point... because the same website, does indeed say its perfectly normal to have sex during your period. Certain precautions should be taken, but then again... isn't that the case with all sex? 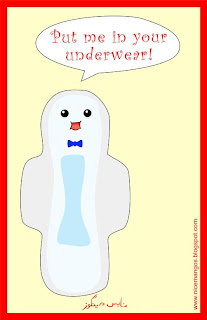 (its time to re-use this illustration, i think :P)


Anyhoo, I took to twitter, to ask what more people's opinions were on the matter. Because I was a bit surprised actually, to read the view that prohibiting sex during menstruation, was actually 'protecting' females. Now of course, everyone has their own opinion and preference... so I'd like to say that I appreciate everyone's input. In fact, without the above comment, I wouldn't have had half as much to say - so thank you!


But I'd also like to point out that there is nothing medically unsafe (religion is another thing entirely) with having sex during your period (see link above for more information). If you aren't in a monogamous long-term relationship... you should be using condoms anyway!


Here is some of what was said; 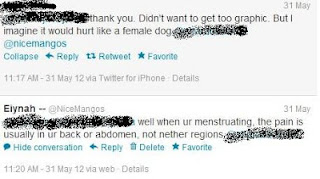 And then I had a volunteer email me her own account of having intercourse during menstruation:


Clearly this is a subject many people have lots to say about. And I'm glad it came out, because this wasn't even on my list of topics to write about... it just kinda happened on its own.


*     *      *
Well my boyfriend and I have been dating for over two years now. Our relationship was physical before any emotional attachments. But I think it's safe to say we are quite in love now. We are both each other's first sex partners although he had fooled around with oral sex in his earlier relationships.

When we are together it's quite impossible for us to keep our hands off each other. It's more of my fault actually since I use sex as validation for love. So the first time I was with him during my period we didn't hesitate to agree on having sex.

The issues I would like to point out are 1. Hygiene 2. Comfort 3. Birth control.

For hygiene we just needed some towels under my nether regions. We layered two towels with a plastic bag between them so as to prevent any stains on his bed sheet. We also had to keep tissues and a sanitary napkin nearby in case of any emergencies.

The comfort is totally dependent on the individual. Mentally if someone thinks it's gross, there's no point in doing it since what's the fun in doing something you won't enjoy? But fresh period blood does not smell bad at all. Smells kind of citrusy. I have to hand it to my boy though. He made me feel like there was nothing wrong with me. After some initial anxiety I was pretty happy.

Physical comfort for the girl can be an issue. During menstruation the cervix distends so the penis hits it harder and there is a lot more sensation. The guy here needs to he careful and adjust the speed and force of intercourse accordingly.

Now because the girl is much more sensitive, condoms as a form of birth control might not be comfortable. My guy usually pulls out right before ejaculation but that might be risky as it requires practice and control. The female is said to be infertile during menstruation but there is a slight chance of pregnancy since sperm can live in the vaginal tract for upto 5 days. If someone's cycle is short and if ovulation occurs right after menstruation, there is a slight chance of fertilization. I would suggest if not done on the first day, keep some misoprostol handy.
The side effects include increase in blood flow after sex since the hormones released during an orgasm speed up the contractions of the womb causing faster expulsion of the uterine lining. My period lasts 5-6 days but if I have sex I'm done in 3-4 days.

Religiously, as far as I know, Islam condemns intercourse during menstruation.

Personally, I would recommend people to try it if they're curious and not grossed out. It can be a lot of fun since sensitivity is enhanced and if done on the first day you don't need to worry about birth control.
*     *      *
Sounds like she really knows her stuff :) 'Cept one thing that I pointed out to her, and would like you to take note of  as well,  is that the withdrawal method is never reliable, because pre-ejaculate can get a person pregnant too.


Just sayin' - You should always know what you're getting in to.....

Anyhoo, here's what the men had to say about sex & religion. Remember, dear readers - that tolerance is key - if there are views expressed here that offend you to your core, the best way to deal with that is expressing yourself in a well thought out, relevant comment.

Fahad, Male, 24
I'm not sure that sex plays much of a role in religion aside from procreation - but I do know there are some specifics mentioned in the Quran.


Sultan, Male, 19
If you look at the view of a mainstream, conventional religious person – sex is very taboo. In religion it’s a very mechanical type thing.


Khizer, Male, 26
I think sex is a part of religion, I don’t know about other religions but in Islam it’s allowed and it’s a part of it. I don’t think it goes so deeply into kinkyness and fetishes etc but its something that is discussed, and Islam does tell you what you should and shouldn’t do, and why you should or shouldn’t … I’ve heard it tells you exactly how to do it because of why you should do it that way because it gives you a higher chance of pregnancy – missionary sex with her left leg on top of your right shoulder…or the other way… so it gets the deepest penetration.


Imad, Male, 25
I think sex plays no role, absolutely no role in religion. Religion I think is all about restriction – more often than not – and giving yourself more things to do … more of a purpose, and restricting one of your most general desires is one of the biggest self-made purposes… so it has no role, technically.


Ali, Male, 29
In religion sex is something for which u should not be looking at grls, or using booze or anything... u just take her pants off......do it and leave her... its wrong completely......  its for mens pleasure ... it is a very concealed  act.. u should not see womens body.. it should be dark when u have sex... and i disagree with that...


NJ, 42, Male
Difficult question. Well I think except Hinduism all religions think sex is for reproduction only. In islam maybe its both repro & enjoyment. But sometimes I think why minaret is like erect penis and domes look like big boobs !


Bilal, 24, Male
Im not the religious type, specially with my sexuality, im not  always thinking about sex and religion at the same time. That would seriously play havoc with my head.


S.K.A., 28, Male
In a society like ours, religion plays a part in everything. Too bad that the most distorted kind of Islam is all we get. Nowhere in Islam is it forbidden to have sex as recreation (albeit between married couples). We choose to ignore that. The curse of Selective Islamism! Muslims when it comes to sex, not when it comes to basic humanitarian principles of honesty, tolerance etc.


Hamid, 24, male
Sex for most religions is something that needs to be strongly and harshly contained and regulated. Rampant sexuality in a society has many ill consequences, and especially if we imagine the situation in the pre-scientific era when there was no such thing as ‘safe sex’ and there was practically no prevention against pregnancy and STDs, and the society was extremely misogynistic. There was some grain of wisdom in that religions tried to suppress and thwart the sexual impulse to avoid those evils, but I think these attempts were not successful and created many negative consequences of their own.


Arsalan, 20, Male
Well, Islam lays down strict injunctions about the subject, so yeah, sex does play a role in religion. I have studied about Islam a lot, and the fact that mystifies me is that while our religion lays down punsihments as extreme as  stoning for adultery, it doesn’t lay down any law about rape. Also, we have accounts of the prophet Muhammad taking sex-slaves as wives. A princess whose father, husband and entire tribe has been murdered, wouldn’t consent to sex with the man who perpetrated these acts willingly, would she?
-----------------------------------------------------
Oh - and if u aren't the easily scandalized type - do go ahead and add me on Facebook
Posted by Eiynah at 11:53 AM 9 comments: