Waking Up to Issues in the Atheist Scene

Not long ago, similar emails to the one I'll share below were only sent to me by Muslims questioning their faith, scripture and double standards, etc.

I still get those, and power to the people breaking away from religion.

Such emails still fill my heart with joy because despite the accusations of 'taqqiya' that I get, I am no fan of religion. I just happen to be of muslim background and vocally against anti-muslim sentiment, so you know how it goes.

I remember how freeing it was to realize you're no longer tied down by an obligation to please a god that never seems satisfied, and one that doesn't seem consistent either.

Now, in addition to the 'questioning religion' emails, I get quite a lot from people questioning the double standards, the rightward shifting priorities, leaders, shady associations with the alt right/lite, etc. within movement atheism (a movement many deny exists at all, to avoid criticism).

Of course it's not at all the same as questioning ancient ideology forced upon you since childhood - you can unclench your buttocks, haters...I'm not drawing an equivalence.

BUT...there's still something about it that feels a little regressive and cult-like. The blind faith, dogmatism, tribalism, homophobia, sexism, sexual abuse and harassment, transphobia - and often, what boils down to a refusal to question leaders. All these things, that make so many movement atheists smug because they regularly assume and *loudly* declare that they're above it all, are present within their own circles too.

These same blindspots and/or bigotries are mocked when describing 'those backwards regressive theists', but they still exist in the post-religion communities and online spaces I find myself increasingly reluctantly a part of.

I mean, there are several atheist accounts dedicated to sharing empty platitudes about how amazing and Rational/Logical being an Atheist is. Here's a sample:

You'll often see people in the atheist scene who are obviously biased to the right declare how 'non-tribal' they are. Or how they are the 'Last Liberal' ...*cringe* I know, I know.... 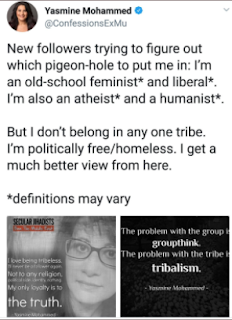 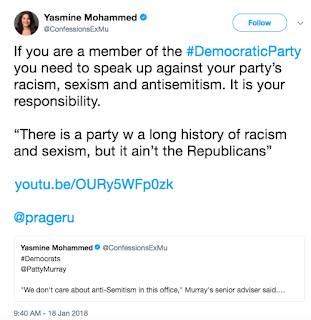 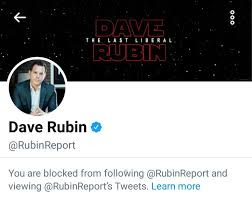 For me personally...after leaving Islam and finding others like myself online, I thought I had finally found a place to belong, a place where people shared my values.

I could't have been more wrong.

"Atheism", as many twitter pedants point out when faced with any criticism of the community or leaders, means nothing more than a lack of belief in god.

So naturally, one would find that people from all over the political spectrum can be atheists.

What one would not expect however, is that the online movement that has developed ...would be biased strongly against the left, progressives, feminism - with many of it's prominent leaders signal boosting right leaning talking points or rightwing talking heads much of the time. 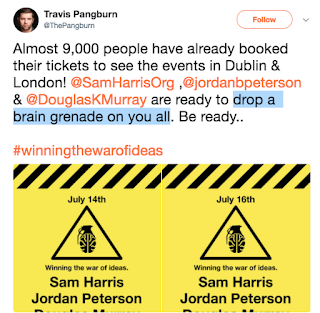 Before moving on, let's just quickly revisit who Douglas Murray and Jordan Peterson are...

Doug is the sweet guy you see in the clip below, who thinks even if the nicest asylum seekers are taken in...their currently unborn children ...in the future... mayyyyy...some day...you know, become terrorists.


We could take in the 'nicest' asylum seekers, 'but their son could be a suicide bomber': @DouglasKMurray on second-generation terrorists pic.twitter.com/3yMHLjF2aj
— The Bolt Report (@theboltreport) May 29, 2017

He's also the lovely fellow who worries about declining whiteness levels of London.

And who's Jordan Peterson? Well he's the noted intellectual who complained in a chat with Camille Paglia about how men can't control 'crazy' women because they aren't allowed to physically fight them.

He's the guy who isn't sure if men and women can work together, and who thinks women who wear makeup/high heels to work but expect not to be harassed are hypocrites.


Jordan Peterson is not sure if men and women can work together in the workplace pic.twitter.com/GmqiVoL4lv
— PeterNorway (@classiclib3ral) February 8, 2018

More recently, Peterson is also the guy who thinks that 'enforced monogamy' is a reasonable and not totally unhinged thing to suggest. 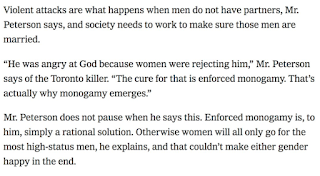 But above isn't the only time he's suggested something as fucking horrendous as that.

So...all around, lovely gentlemen. Who wouldn't want to have multiple events with them and signal boost and promote them...right?

The Atheist movement (that does not exist) has a distinct culture, distinct talking points, has centred and rallied around the same causes, socialized at the same conferences and supported the same atheist/humanist groups....it has clearly appointed top-tier authorities and leaders, who's words are often treated as infallible by the most devoted...no matter how contradictory.

Hmm...it all sounds so familiar.

Its amusing to see people tie themselves into knots trying to defend some of the stuff out there.

The latest embarrassment was a rather hilarious piece on these self dubbed members of the "Intellectual Dark Web" (IDW) featuring a bunch of anti-left figures with at least two prominent atheists in the group (Rubin/Harris).

How they agreed to pose for a photoshoot where they were told to stand creepily in the bushes I do not know. But it was incredibly entertaining.

The term IDW was thoroughly mocked (as any self congratulatory bullshit should be), as were the members. 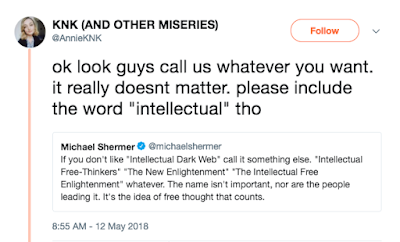 Mockery aside though, It's quite depressing that movement Atheism has turned into such a joke. I valued it so much once.

This unraveling of the movement and it's leaders has been tough to come to terms with. Especially for those of us who have already done this bit before...wrestled our beliefs, questioned respected leaders, lost community for it, and so on.

I had noticed a troubling turn 2-3 years ago. The questions in my mind became harder and harder to ignore when Rubin arrived on scene. He really brought the hypocrisies to the surface.

My personal, recent last straw was the treatment of the Krauss thing generally among movement leaders....and the Ezra Klein/Harris convo, the utterly obvious flaws in thinking. That was really it for me. No looking back and hoping former heroes come to their senses.

But anyway, the point of this blog post was to share one of several emails i've received in the past couple of weeks with the same theme.

If you have a story like this to tell, email away! (nicemangosDOTblogATgmailDOTcom)

I'm so glad more and more people are Waking Up and recognizing that something's not right here.

It's starting to feel a bit less lonely on the left side of movement atheism.


About two years ago I heard your podcast with Harris and it was a defining moment.

Harris had taken the place of a hero. Your criticisms made me defensive and dismissive but I couldn't help carry them with me after that and notice Rubin, Saad, and so on.

Peterson came along and I felt strange. When did dubious messianic preachers become the cool new thing the kids are into?
I watched Bill Maher have this unremarkable chickenhawk cult leader in the making on his show unquestioned, unchallenged, and that's when you popped into my head for the first time in a long time.

When I went to see what you were up to, I was really happy to see you were still active, and having conversations about the alt-right in movement atheism.

I'm really thankful I'm not blind to these problems as they unfold, that I'm not in denial, not falsely convincing myself of my rationality while being a hypocrite.

That was largely provoked by you and a few lines of criticism.

Thank you to all my wonderful Patrons who make this work possible.

If you enjoy my work please consider supporting via Patreon here.
Posted by Eiynah at 4:52 PM 5 comments: