The irony here is really something. Gad Saad & Jordan Peterson were on a Free Speech panel last weekend, (at an event that was previously cancelled) where this time they actually justified having someone uninvited, de-platformed even, from a SACRED...

I mean you know these guys right? (Please note there were two other people on stage who I don't really know much about so I will keep this post about my faves, JBP and The Gadfather, yes he really calls himself that) 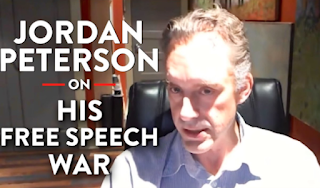 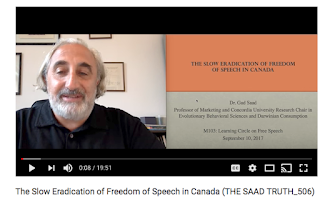 I mean ...really....this is pretty much ALL they talk about. 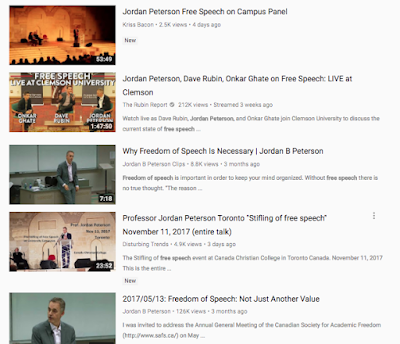 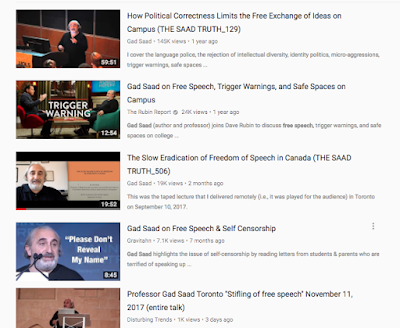 In a hilariously hypocritical twist these Politically Correct Regressives were trying to justify silencing a 'different viewpoint' just last weekend. 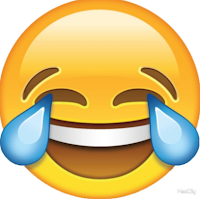 Nevermind the person they uninvited was probably well worth uninviting (in my cucked leftist opinion) as she was the Rebel Media 'Journalist' Faith Goldy who appeared on the  Neo Nazi Daily Stormer affiliated Podcast after Charlottesville.

But what do I know,  I'm not the one constantly advocating for & promoting alt right/light figures.

It's especially rich coming from them because Saad has on more than one occasion promoted White Genociders such as this person (who also happens to be a holocaust denier, suprise surprise): 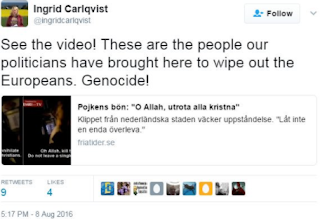 And Jordan Peterson has himself had a friendly chat on a Neo Nazi podcast about 'Western Civilization' with a person who advocates for using violence to remove non-whites from her future fantasy ethnostate:

How do people with such associations and endorsements think they get off for disinviting someone for associating with better known Nazis/White Nationalists? Speaking of 'guilt by association', you'll never guess what Gad had to say about Faith Goldy:


Well well well, in this situation...Gad thinks you are who you hang around with ...that doesn't mean good things for him now, does it - as someone who's literally called a holocaust denier a "Viking Heroine". Or is this standard selectively applied?


Now, let's take a look at their explanation for deplatforming Goldy,


First point I'd like to make is, that it's disturbing how softly they all tiptoe around someone they themselves just mentioned was on a Neo-Nazi affiliated Podcast after the Charlottesville tragedy. None of the panelists are able to disavow her.

Peterson: I know Faith, I don’t believe that she’s a reprehensible person (after knowing of and saying he watched her appearance on a Daily Stormer related show, which he himself didn't find acceptable to the point that he's having to justify to a full room why he, the free speech hero is de-platforming someone.)

Peterson: ....She was associating with people who’s views she should have questioned. (Well, that's putting it mildly, Dr P.)

Peterson goes on to talk about how she should have asked some hard questions but then immediately backtracks and starts making excuses for why she didn’t challenge any views on the nazi podcast. You know who else went on a nazi podcast and didn't ask any really tough questions right?

In fact he's criticizing, leftist, postmodernists, "neo-marxists" in most of that conversation and even claims to the *neo-Nazi woman* he's conversing with that "their aim is to shake the foundations of western civilization to the core" - just imagine sitting with a Nazi and dumping on leftists as destroying western civilization, then going on to deplatform someone else for appearing on a nazi podcast while not asking tough questions.

The hypocrisy is astounding.

Now back to the video where he's explaining why they deplatformed Faith Goldy:

Peterson:  ....its more difficult than you might think when you’re facing people , even if u don’t believe them, to be rude enough to challenge them.

Just take a minute to let that sink in… JBP who is furious with liberals, postmodernists and SJWs all the time, thinks its hard to be rude enough to challenge ppl on a nazi podcast.

You can see what his priorities are.

“...that’s not so easy, especially if you’re an agreeable person” continues Jordan

...as they sit next to Gad Saad who’s done a glossy softball interview with several white genociders and even a holocaust denier.

Gad says in his explanation to the audience, “…there is also a pragmatism right, you may decide you’re all for freedom of speech BUTTTTT [emphasis mine] that doesn’t mean that you invite to the dinner party someone who’s views you don’t agree with… (isn't this pretty much what people's argument has been against shutting you and your selective free-speech friends down in the past?)

And then he immediately softens the blow by jumping to “I..I’m not saying that was the case with Goldy”

[Yeah heaven forbid Gad, that you do the decent thing and come out against her views openly, without hesitation, at the first go after knowing she went on Daily Stormer related media for a friendly conversation.]

Here's Gad on Free Speech when it's not being applied to people *he* wants de-platformed:

“So the fact that you might for some event decide to disassociate from that person doesn’t suggest that you are being hypocritical to freedom of speech” —— LOL except you’ve literally been outraged at people about this same thing before…you hypocrite!! You didn't just personally disassociate from her, you wanted her de-platformed from a free speech event.

And here's Jordan, unable to stand for his own actions...."I didn't say we were correct". Let's face it, these guys were a mess. Maybe now they will think about why it is that people don't want to associate with them, for 'pragmatic' reasons... or with Milo.

Anyway, their own rightwing fans weren't having it:

And then of course there were the mutual fans, upset that there was any tension between these lovely people at all.

Gad soon released another video on his channel explaining his side of what went down, excuses, excuses. By this time he'd been experiencing some hate from Daily Stormer-friendly Faith Goldy's fans so he wasn't quite as soft, but note that this change didn't come from principle, it came from Faith Goldy's fans personally attacking Gad with vile, unacceptable anti-Semitic comments. The fact she went on Daily Stormer related media still had him tiptoeing around whether he disagreed with her views or what kind of person she is.

The Youtube comments on his video ranged from his disheartened anti-sjw fans depicting him as a buzzword using SJW to being just disgustingly bigoted.

Gad shared some of these anti semitic comments on Twitter and they truly were horrific.

Seeing the corner he'd backed himself into by palling around with and sucking up to white genociders, white nationalists, holocaust deniers and general alt lite/right figures, made me feel quite sad for the man who had in the past instigated pile-ons on me, and tweeted angrily about me for days for just pointing out his evident shady associations...."for pragmatic reasons", you know.

On twitter people pointed this out to him repeatedly. I wonder how that made him feel...I wonder if he actually gave it some thought, the fact that he was propping up and associating with people who would drop him the second he stopped being useful to them.

No matter how hard he panders...Gad won't ever be welcome in the ethnostate as a Jewish immigrant from the Middle East. I sincerely hope he thinks about the consequences of his actions in light of this incident. 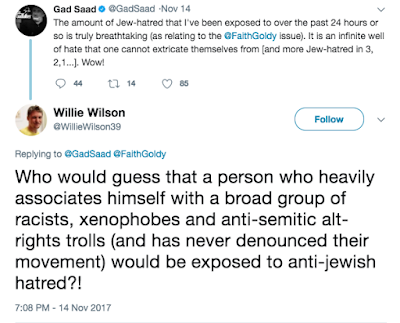 Gad's own views about Muslim Refugees aren't so non-bigoted either, maybe some self-reflection can happen after this?

Because you know....refugees = automatic anti-Semite, cuz Muslim. That's not bigoted at all...its interesting that his anger was directed always at refugees for potential anti-semitism, but never once directed at the many far right figures he's promoted.

Will Gad and Peterson reflect on their own associations and others wanting to 'pragmatically disassociate' from their types of viewpoints now? Or will they go on as if none of this happened and they are still the Free Speech Warriors they claim to be?

Hopefully people will start to see through their many hypocrisies and double standards, but maybe that's a lot to ask of alt-right/lite friendly audiences. I mean some of these fans willingly refer to themselves as "Gadfellas" and make religious artwork for Peterson....which he tweets unironically of course. 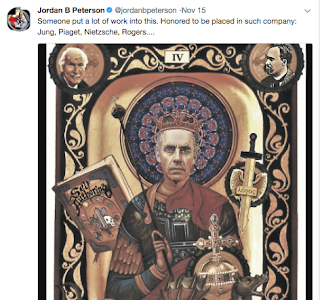 If you enjoy my work please consider supporting via Patreon here. Say what you will about fans of right wing youtubers and podcasters, but one thing they do well is support the voices and causes they care about. There are thousands of you who listen to my show and read my posts, but very few of those actually help to make sure the work continues. If even a fraction pledged just $1, I would be able to do much more.

A huge thanks to all my Patrons who make this work possible. And a shoutout to the newest ones, Greg D., Anthony R, H.S, Graham, Joey, Michaela.