The Beast of Blasphemy Takes Another 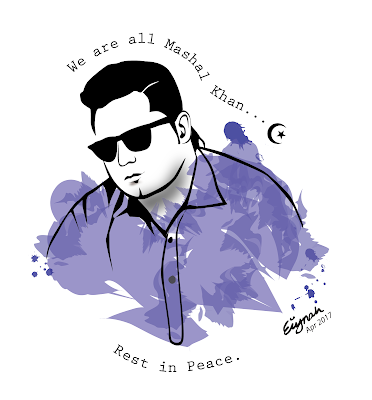 A young bright-eyed Mass Comm. student at Abdul Wali Khan University, who called himself a Humanist…was shot and beaten…his body was still being beaten after it had stopped moving.

I made the mistake of clicking on one of the blurry videos circulating. It's something I can't ever unsee.

Mashal is one of the latest victims of Pakistani religious extremism. My heart breaks…every time. And every time it’s harder to pick up the pieces and move on.
There have been so many victims, taken by the same monster…the same darkness that resides in too many Pakistani hearts.

It’s time to ask ourselves, how many amongst us think ‘blasphemy’ is a crime…
It’s time to *really* ask what the state’s contributions are to creating an atmosphere ripe with hatred, intolerance and extremism...

In a land where diversity is not accepted, where we have to denounce Ahmedi’s before we can even get a passport…

From the blog. Yes this is what we have to sign to get a #Pakistani passport. In this century. pic.twitter.com/P5JgENmpF9
— Eiynah -- (@NiceMangos) June 18, 2015

In a land where ‘blasphemy’ is officially a crime, punishable by death or imprisonment…don't you see...?

The seeds for this are sown already.

Their murderers celebrated by thousands of people. 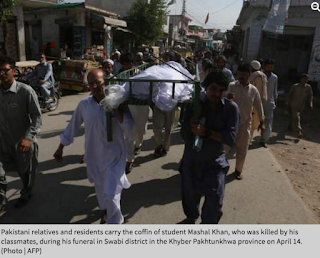 Youtube stars snuffed out, Singers murdered..journalists attacked…children slaughtered…all at the hands of these religious extremists who’s thirst for religiosity is never quenched. They threatened the now late singer turned preacher/evangelist  Junaid Jamshed too.

No one is immune, no one is safe…there is no legitimate reason for this law to exist. It can be used against anyone, any time. Even it's supporters…like Junaid Jamshed were not safe from having it thrown back in their face.

A warning to all those who support blasphemy punishments now…this can and will come for you too.

All this happens in an environment where the Prime minister himself supports blasphemy punishments. And then we act shocked…"how did this happen?" We say… come on… you know how this happened.

There are now rumours that these accusations of blasphemy were purposely floated about Mashal Khan to silence his criticism of university admin. I don’t know how true this is, but sadly it wouldn’t surprise me.

Do read this thread on how the false accusations against #MashalKhan were just a means of silencing his rightful criticism of Uni admin https://t.co/gVIo50iAbR
— Dr. Naveed Alvi (@Nav_Derm) April 17, 2017

What chance does someone like Mashal have when these charges are brought against him, when it’s so easy to whip up a furious mob intoxicated on religion in Pak-istan, ’the land of the pure'.

It doesn’t even matter if those charges are true or false. That is completely irrelevant, but sadly it’s been a huge part of this story. Well intentioned people…desperately trying to prove Mashal was a non-blasphemer, a pious ‘good Muslim’, in who’s dorm room they found prayer mats, and other religious items.

Buying into this ‘good Muslim/bad Muslim’ dichotomy is where the problem begins in the first place. Why can’t we be a people that leave matters of religion in the private sphere, why can we not tolerate even slight differences in opinion? Why do words and questions fill so many with murderous fucking rage? Why can’t we teach our children to celebrate our differences?

And…whats wrong with blasphemy? If you believe in an all powerful god, then he should not need you to stomp out the life of anyone who so much as breathes a word questioning that god’s prescriptions. Can he not withstand even minor scrutiny, this all powerful god?

We have to ask questions to progress, we have to stop glorifying religion. Dial it waaaay down…Pakistan exists perpetually on a tipping point. It tips every day…and innocent lives are lost. That’s on us - it’s time to speak out, throw your hat in the ring, make your mark…do your part for a liberal and tolerant Pakistan. Speak up for minorities, speak out against injustice.

I’m sure that poor, dear Mashal was a good Muslim…all the evidence points to it. But I wish we lived in a world where this just. didn’t. matter. to Pakistanis. People who are not following Islam the way you want them to are also good people, so are people who don’t follow it at all, and so are people of each and every minority faith that exists in Pakistan. In fact the worst people you will find in Pakistan are those who think there is only one rigid way to follow religion, and that is their way, coincidentally. Those are the one’s who try to police the thoughts and words of others.

Everyone has a right to exist in safety…it’s sad that this even has to be said, no one should be murdered or punished over words and differences in opinion.

Pakistan is the country that produced Malala, but it is also the country with the harshest rejections for her.

If Pakistan wants to exist in an increasingly globalized world in the 21st century, where different opinions and sources of information are at our fingertips, its going to have to pull itself out of this sinkhole of extremism, otherwise it will continue to fail.

That’s an effect on all it’s people collectively.

It’s time to rid ourselves of the mindset that thinks a backwards blasphemy law should exist, it’s hurting us all.

I have seen another argument floating around Pakistani Twitter that disturbs me. It’s the “Blasphemy laws are being misused/manipulated against innocents” - No. That’s garbage…there’s no legitimate way to use a blasphemy law. Blasphemy is as simple as ‘a difference in opinion’. If you use this argument you are indirectly condoning some instances of punishment for people with differing opinions on religion.
Some day you could be that person, depending on the group judging you.

We are all Mashal Khan, because that could be any one of us..no matter how religious you think you are, it’s not enough to satisfy insatiable blasphemy laws.

We are all Salman Taseer

We are all Asia Bibi (not killed, but imprisoned)

We are all Shahbaz Bhatti

We are all Sabeen Mahmood

Do not forget these names.

***
Important to remember: yes, while those who have killed people like Mashal Khan and Salman Taseer are Muslim, often the victims too are Muslim. It is voices like theirs we must fight for. Those who generalize and demonize Muslims are not doing that, In fact they are part of the problem.

From a western, ex-muslim Pakistani-Canadian perspective like mine…it’s getting harder and harder to have this discussion on an international level, because there’s always some who will jump on our voices and use them to cast our own loved ones in a bad light. I feel like i’m forever walking a tightrope. Call out illiberalism on all sides, abandon tribalism so we can have these conversations honestly.

A huge thanks to my patrons who make this work possible.

If you enjoy my work and would like to support, you can do so here
Posted by Eiynah at 11:27 AM