As a woman who grew up under Sharia in Saudi Arabia, I cannot help but resist the glorification of the tools of my oppression.

As much as I loathe Trump, and the chaos he's creating, as much as I stand in solidarity with Muslims at this time....as much as I am personally affected by discrimination against Muslims myself...I cannot sit back and watch conservative Islam be championed in this complex and toxic political climate.

I ask my fellow critics of religion to be particularly cautious at this time not to feed into far right narratives of hate.... similarly, I ask my fellow left leaning liberals not to fall into romanticizing conservative Islam. It's like walking a tightrope, I understand - but the more we avoid falling into traps on either side...the better equipped we will be to combat this.

Here is a brief message on the subject:

Here is the article mentioned in the podcast.

And below are my pieces in Response to the Shepard Fairey one. Let me know your thoughts! 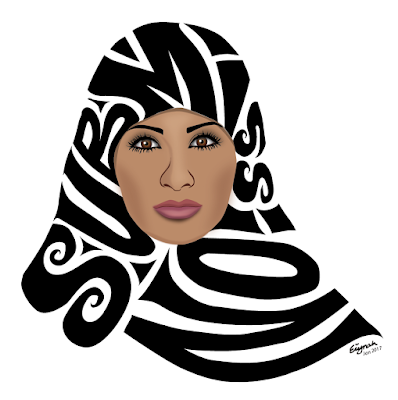 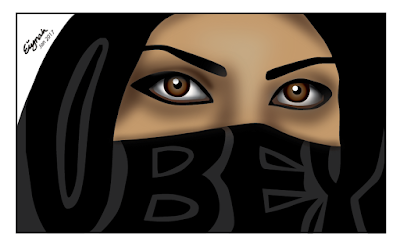 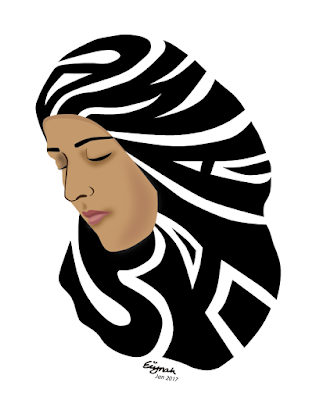 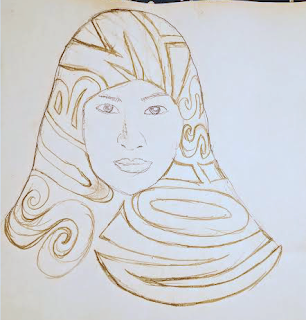 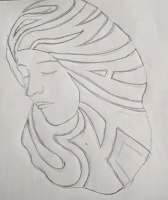 If you enjoy my work, please consider supporting it here - Now more than ever we need reasoned balanced discussion, and with your help I can do so much more.

Thank you to my patrons who make this work possible.

Islam & Creativity: Art that Could have been... 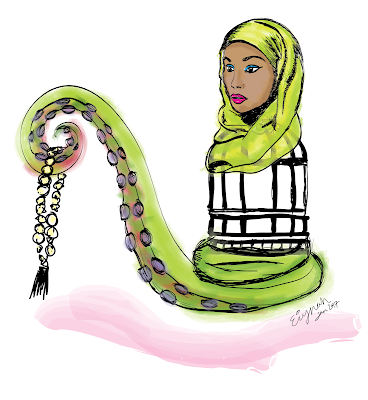 As a person of Pakistani Muslim background who dabbles in... art stuff, I’ve long been aware of the limitations imposed upon visual artists and creative types of every sort, in my motherland.

I see the precautions and risks Pakistani film-makers take, just to film documentaries, especially if they touch on religion and extremism.

Actors in Pakistan, once had to make sure their clothing passed ridiculous modesty standards before they could appear on TV.

During the reign of religio-maniac dictator Zia ul Haq, women on TV were required to have headscarves on at all times, and if there was a death scene, or drowning scene, their heads simply wouldn’t be shown, to avoid the immodest picture of a woman without her headscarf.

Unacceptable… even in death. 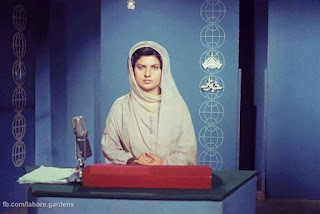 Things are better now, TV wardrobe-wise, but the underlying sentiment of curtailing the imagination has not changed. 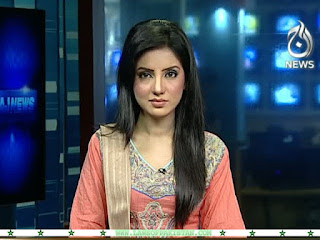 This leashing of creativity spans the Muslim world, in varying intensities, but its everywhere in it’s uniquely oppressive, Islamic way.

I grew up in Saudi, art was pretty much non existent there…aside from a few painters in the malls who were always painting landscapes, fruit arrangements or a picture of The King.

Things started to change as I grew older, and the world grew smaller through tech. With smart phones, the internet and satellite TV it was harder to control what people read, what shows they watched (words related to “royal” “prince” “king” were often muted even in cartoons when I was younger), or what music they listened to (words were commonly erased or blacked out from album covers, female singers were covered in black marker).

In my last year there, I attended an “art” exhibit somewhere…something incredibly novel at the time for Saudi life. Of course all the artists being showcased were male.

There were no figures, only geometric shapes, landscapes and Arabic calligraphy.

There was a time when simply having a camera out in the open in Saudi was taboo. I remember my dad having to get out of the car and hurriedly, covertly take some photos for my class project on buildings in the old part of town.

The contradictions were so many, taking photos in the open was taboo, but there were photo developing places on every corner. Drawing figures was frowned upon as it was considered “idolatry” but the men hired to stand in malls and paint The King, over and over, were considered ok…nay, they demanded a form of idolatry from the 'loyal subjects'.. in that regard.

It was utterly bizarre for a young questioning mind to grow up around this. I don’t regret it though, the strangeness of Saudi Arabian life has made me who I am today. I have a mixed loathing and affection for it, which i’ve discussed before, some warm fuzzy feelings of nostalgia when I hear Arabic, and also feelings of terror as I remember the morality police screaming at me. 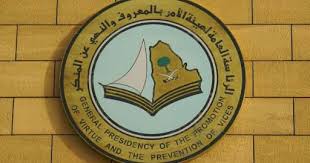 My Pakistani relatives who lived in Pakistan always looked down on life in Saudi...in terms of ‘freedom of expression’. Yes, there is no morality police there (other than the public itself), yes there are women allowed on TV without Burqas (but the burqa is revered and glorified), Yes some creativity is allowed (with many restrictions)...

But who are we kidding here? 'Freedom' is not a thing associated with the Muslim identity, unless you are lying to yourself. The more staunchly Muslim you get, the less freedom you have. Yes, this could be said about any religion...but the orthodoxy Islam commands in the average adherent is unmatched today. 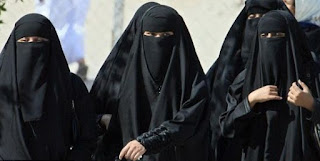 It is a religion more recent than the other big ones…so, it had the opportunity to plagiarize build upon already established frameworks of oppression. Coming later, gave it the chance to be more nit-picky, more controlling and more hateful than some already pretty hateful ideologies.

***
Last year In Pakistan we saw Qandeel Baloch, a rising youtube celebrity, who simply didn’t abide by modesty codes of any sort…She was just a young person having fun, something most of us wouldn’t think twice about in the west.

Her life was was taken, brutally, in an honour killing by her own brother. 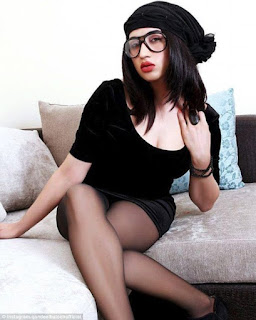 Before that, in 2014, we saw an iconic, elite, Pakistani popstar-turned-mullah Junaid Jamshed, be accused of blasphemy himself… for having a casual tone and 'poking fun at Ayesha', the prophet Mohammed's wife (in an albeit sexist manner, but the sexism is not what pissed the stauncher mullahs off).

The irony... of someone who's a critic of secularism himself, a proponent of hardline Islam, being accused of blasphemy. 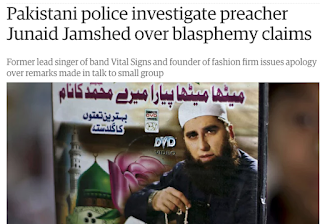 It just goes to show that this blasphemy-beast isn’t satisfied, no matter how religious you are. It is flawed in its humaneness obviously, and strategically...in the sense that it can be turned around and used against anyone -even those who favour and defend it.

There will always be someone more religious to look down upon you.

Sadly, Junaid Jamshed died late 2016 in a plane crash…and even the way Pakistanis wanted to remember him was judged, monitored and Islamized.

Request to TV channels- Pl don't show Junaid Jamshed's music life that he had left many years ago. Remember him as a  preacher of Islam.
— Ansar Abbasi (@AnsarAAbbasi) December 7, 2016

Yes, we lost his creative mind to religion later in his life, but he was just one more, silenced.

Preacher later in life or not, this was no reason to control how people remembered him.

To demand their memories of him as a singer be wiped clean, and he be remembered only as a 'holy man' not as a ‘disgraceful entertainer’ is absurd.

He died as a preacher. But shameless pak media will try to portray him a music star@AnsarAAbbasi
— Mazhar Khan (@shanglians) December 7, 2016

The depths religion wants to get its claws into is frightening. They even want to rewrite history, to satisfy the faith, and they have the media power to do so.

Taher Shah, unintentionally hilarious Pakistani singer, was also forced to leave the country because of threats. I'm not sure how he's even controversial. He's like one of those singers you see in the auditions of America's got Talent, that don’t make it through… but they’re so bad….it’s good.

The Mullahs, they won't even let us have cringeworthy stuff.

Art-policing transcends geographical borders too, it has affected many religious communities…
But none quite like the muslim community.

Salman Rushdie, Charlie Hebdo, and countless other examples...The most recent of which is anger and offense directed towards 'The Real Housewives of ISIS'

…a comedy bit specifically mocking *terrorist group* ISIS, is seen to be offensive to Muslims by many. It's sad, really. 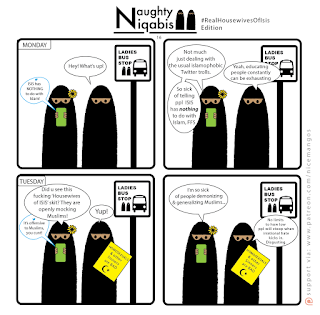 This type of reaction over something like the mockery of ISIS is disheartening and depressing. What kind of place are we in if people of Muslim background cannot partake in and enjoy skewering extremists, especially in the political climate of today, where Muslims are under scrutiny, where they are at times unfairly generalized as extremists…why would you want to blur those lines further…?

Its time for us…specifically people of Muslim background to laugh..to ridicule the parts that need to be ridiculed. It is our voices that will hold more weight than any other…it will be our voices that can change the narrative, convince children of tomorrow not to go down that path.

Maybe someday, we can have our own 'Book of Mormon'-like musical...and hopefully everyone will get to keep their heads afterwards!

Thanks to all my wonderful, generous patrons for making this work possible.
A special thanks to Vladimir, Ritchie, Rob, David, Charlie, Peter, Sean & Ruthless.

If you enjoy my work, please consider supporting via Patreon. With your help I can do so much more.