How to spot a Homophobe 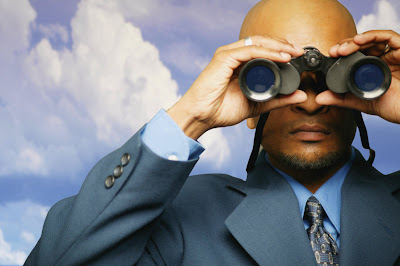 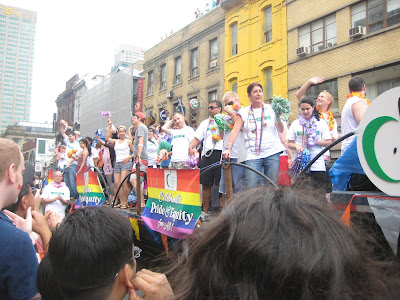 Just like regular decent people, homophobes come in all shapes and sizes. Sometimes they're hard to spot, because they're masquerading as tolerant...but fear not dear readers...because my homophobe-spotter is just as sharp as my 'gaydar'...You will soon be able to see these types from a mile away, and avoid the frustration of ignorant conversation.

I was inspired to write today because I came across some old pictures I took at Pride a couple of years ago.

Our annual Pride Parade is really something...we have people coming from all over the world to witness this wonderfully inclusive part of Toronto culture <3... and its a freakin' blast, whether you're gay or straight or bi or trans.... as long as you're open minded, you're guaranteed to have a good time. What i don't recommend however, is going with your mom...or dad...(especially if you're brown)

Not that I did, but every year my mom wants to tag along with us. I have to politely refuse, because as close as we are and as liberal as she is....it'd be a bit strange to watch so much nudity and sexuality shimmy down the street while she's there. Plus we wouldn't be able to get totally shmammered and idiotic....so each year I have to remind her, "I love you mom... but this is one thing we can't do together" and she's always like, "whats the big deal... its just a parade"... one year though, my poor younger sister got suckered into going with my mom...AND dad. My dad was less than enthusiastic, but he happened to be downtown for other reasons, and couldn't avoid it.

Now, my dad's a fantastic guy... liberal in many many ways... but something like homosexuality bothers him to a degree I just don't get. But then again, just sexuality in general is a bit much for him to handle. He can't even stand a simple discussion... or even the mention of the word sex...so I guess expecting him to be ok with sex that's not even 'mainstream' is a bit of a stretch. Its hard for me to say that he's a homophobe...because that's such an ugly word for someone I love so much..but lets face it..a lot of our dads probably are, to some degree. You can't entirely fault them for it either - its a generational thing, they're a product of their upbringing and the world that surrounded them back in the day. Once they've gone through more than half a century set in their ways, you can't get through to them.... so you've gotta forgive that particular strain of homophobia, they can't help it. In the same way, a lot of old people say so many racist things too....its just the way the world was when they were forming their identities. *shrug*

But where was I....oh yea - so......my sister and the parents.. out on the street for pride parade .... holy shit! I was a few blocks away thoroughly enjoying my time, but my poor sibling was busy diffusing tension. My dad had been dragged into this by my overly adventurous mom... and soon they had both had enough...the nudist part of the parade wasn't especially enjoyable for them, its a bunch of saggy, naked old men usually, not the best sight at pride, but lets not get discriminatory here. If ya don't wanna see it, stay at home.

As much as I didn't want to hang out with my parents that day, curiosity got the better of me...I was dying to hear what they had to say...especially after I saw this multi-cultural group in the parade...and one of the guys was holding a Pakistani flag (had his face mostly covered with a black hoodie though, poor guy)...so we gave 'em a call and found them in a food court near by. My dad was sitting there looking particularly shocked, and my mom was all bubbly and full of stories. Typical. My dad was pissed, especially at the Pakistani guy. I couldn't really reason with him. He doesn't explain why this angers him so much...it just does. But like I said before, so does sexuality in general...he is a product of migration and partition between India and Pakistan, he has witnessed countless horrific things since childhood. He has seen things like death, burning, disease....to him these are real problems....and such flamboyant displays of sexuality are just not serious enough to be treated as issues.

Back in his time people didn't have the courage to demand such rights, they were just happy they survived the migration. There was no place for things like orientation amidst things like hunger, poverty, losing loved ones, watching people be hacked to death....

But I digress, this isn't a post about my dad, in fact its a post about stuff he's not very fond of at all...like I said, I can forgive and almost understand his reluctance to accept anything that's different from what he's used to. But what I don't get is how and why many young, educated people are so intolerant of homosexuality.

There's a couple of types that specifically piss me off;

1) The complete 'Jahil'*: this kind of person is the worst by far, doesn't know jack about anything...and will usually quote something like religion, with no logic or reason to back their hatred of homosexuality. Don't bother arguing, or trying to explain anything to them, because they usually have the intellect of a squirrel, with really thick skulls that are virtually impenetrable. Sadly some of them are totally and hypocritically gay themselves.

When writing about these freaks I'm reminded of a news report I saw in Karachi approximately 5 yrs ago; it was about a (bearded)Muslim man who confessed to the imam of his mosque that he was acting out on his homosexual desires, the imam told him that that was a sin and to absolve himself he should sacrifice something that was dear to him....what this scrotumface translated that into was ghastly beyond words. He thought the only way his gayness would be 'cured' and forgiven was if he chopped the heads off all 3 of his sleeping children. And so that's what this asshole did. I don't know what became of him.....but for fucks sake....its idiots like that that give Islam a bad name. And what a dickwad imam too.... ugh.... none of this would happen if our people were more educated.

2)The 'Educated' Jahil: A living, breathing oxymoron. They're hard to figure out really, they live amongst us, they're doctors, teachers, lawyers...etc. And you won't be able to tell at first, because they're seemingly learned...well-traveled...but then one day you're having a conversation with them and they'll say something like, "omg, there's a gay guy at my work...its so disgusting, its just not natural" And be warned, that'll completely catch you off guard..but remain calm - because getting ur panties in a bunch and trying to argue with these types is pretty pointless too. Their educated side has usually been glazed over with a wash of blind faith. And I have no problem with people of religion, as long as their critical thinking skills and logic remain intact.

3)The Pseudo-liberal Ignoramus: this kind of person likes to pretend they're ok with everything when they're really not. They'll usually say things that'll clue you in to their particular condition. Something like, "Oh I'm fine with gay people as long as they don't try to hit on me." Wtf does that mean? really...you think you're that attractive that you'll tempt every single gay person of the same sex that you cross paths with...? Its just as ludicrous as a straight person assuming that everyone of the opposite sex wants to sleep with them (ugh and those exist too)...or they might say something like, "I'm fine with gay people as long as they don't touch each other in front of me..." So its ok for you to suck your ugly partners face in front of everyone but gay people need to keep it in the bedroom? That's bullshit.

4) The Double-Standard Douche: Sadly, this type is almost always male. Will make it clear that he's not ok with male homosexuality, but will make it a point to specify that he's fine with lesbians....will usually follow this up with a comment on how he'd like to 'do it' with a lesbian. Sorry dumbass....a lesbian's not likely to do it with you....especially you! And I'm not trying to say that any guy with a lesbian fantasy is a dick....just the ones that are homophobes at the same time. Cuz yeah, lets face it... most guys love the idea of two ladies gettin' it on...and if you aren't a homo-hater, there ain't nothing wrong with visualizing two lovely ladies. But if you hate homosexuality.. then stick with it asshole... be consistent, don't drop the hate when its convenient.

There ya have it folks, those are the main types I've been able to identify...feel free to let me know if you've spotted any other varieties. If you really want to be sure you aren't catching homophobe cooties...then print out the following picture (i took it at the Parade, you're welcome :P)...keep it in your wallet...if ever in doubt...pull it out, and all possible homophobes will clear the room! 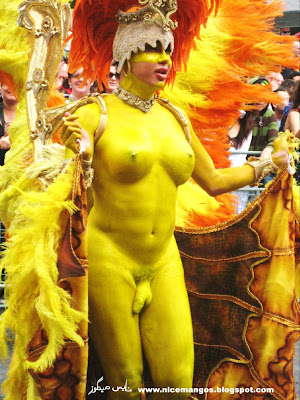 I kid, I kid.....seriously, that picture could send a lot of perfectly nice people screaming if they aren't expecting it...sooo don't subject unsuspecting passersby to it. However, if you really want to, you can link em to the blog.

And for those of you whose eyes are burning from the previous visual, I'll post a picture that turned up on my camera after my husband was holding it for a while. 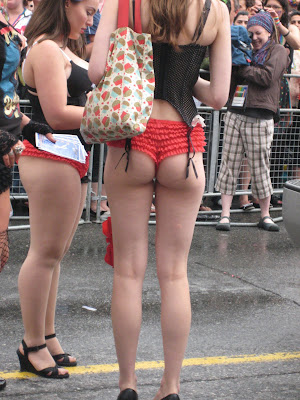 ---
On a more serious note however, sometimes I get comments like this from readers,

I don’t believe its natural, most homosexuals I know of turned gay after some incident,esp. something in their childhood…for me the thought of having feelings for a person of the same gender is just way out there for me to be able to comprehend it…

Against it, we are who we are born and we need to respect that…changing genders is
disgusting for me, each gender is special and we should all value what we have and
embrace and enjoy it, not go looking for something else…the grass isn’t always greener
on the other side…

If that's how you're feeling, then I'd love to talk...maybe a little more information could sway you...and maybe not - but either way discussion is always healthy.
Posted by Eiynah at 9:05 AM 14 comments: