In the last post, none of the women claimed that sex is an equal act between both partners all the time - no surprises there :/

In fact Ayesha, a feminist and homosexual woman, brings an interesting view to light...The picture she paints of heterosexual sex is gruesome…but she’s definitely got a point. It kind of does look like an act of violence where the man is 'giving it' to the woman… .'impalement'…maybe that’s a slight exaggeration…but maybe it isn’t - depends on what perspective you're coming from really. 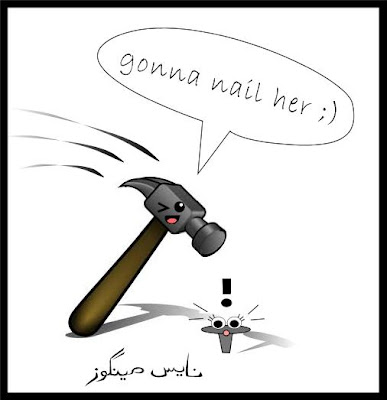 Just look at how having hetero-sex with a female is described: I nailed her, I banged her, I fucked her, I did her….I mean these are only a few expressions off the top of my head…and these are commonly used…These terms may not be relevant to Pakistan specifically, since they're in English…but the point i'm trying to make is something as basic as language can confine a woman to a subserviant role. If anyone can think of urdu examples, I'd love to hear them - I'd just rather not rely on my own urdu skills... But yah, I mean the point of this blog is to create discussion, and although I'm getting emails from people (which I really appreciate), I'm not getting as much discussion on here as I'd like. And it kind of defeats the purpose. Please, don't be timid... speak - surely you must have an opinion on the topic....

Inequality for women is a worldwide epidemic…it just happens to be more obvious in less developed countries like Pakistan. That’s probably because our men haven’t learned to cover their tracks as well as men from more prosperous nations. Anyhow, unless people are willing to discuss and air out issues - we are never going to get anywhere.

Anyway, where were we....for Fatima, this inequality in sex exists regardless of whether its hetero or 'homo' sex and even Sumeira (see last post) mentions that a power struggle is involved. It’s about who can get who off first…and whoever does it better (for their partner) holds the key to that power in bed.

To simplifiy it, if you're incredible at getting your partner to climax, you've got all the power in bed.

I can see their point, but I can’t say I fully agree…I assume that they hold this selfless yet egomaniacal attitude in bed because they are women…and it’s been drilled into every one of us…we exist to please… that’s supposed to be the essence of our being…whether we consciously know it or not. I see how you can manipulate your partner because you’re a magician in the bedroom and how that can stroke your ego…but in reality…most of the times… it’s the guy…or person…who gets off first that has the power in a relationship. Because once they’re done…it’s totally up to them whether they are going to continue to pleasure the other party or turn around and go to sleep….it’s sort of how Layla describes…

“I feel like it’s a race you know to get to the finish line, whoever gets there first is obviously the winner…”

....And more often than not….it’s the guy who always wins that race, as Zobia says,

“…because achieving the male orgasm is a much more straightforward task…. women who seek that kind of pleasure are seen in a very negative light, to them sex is all about what a man wants or needs.”

In a traditional Pakistani setting, a woman who demands sexual pleasure is seen as some kind of freak….nothing but a pervert. You gotta love those double standards.


To me, nature does play a very significant role in this (my sociology professors from uni would totally kick my ass if they heard me now, lol) – why have women been made to be ‘nailed’ so to speak, and not to nail? Why isn’t the female orgasm as easy to achieve as the male orgasm? Are we being compensated in any way? Ok sure….we’re less hairy, softer and easier on the eyes….maybe female orgasms feel better than male orgasms…? Well, for one thing – we can have multiple orgasms and though I’ve heard of it happening to men, I don’t think it’s as possible as it is with women. But because of all this unfairness and inequality in the bedroom, many women don’t ever get to experience climax. Several of the interviewees mention knowing women who have never had an orgasm. Some suggest masturbation – while knowing their advice won’t seriously be considered….some attribute this problem to a lack of premarital experience…maybe time, a patient/experimental and caring partner is what’s needed…It’s an age-old problem however, this elusive female orgasm. 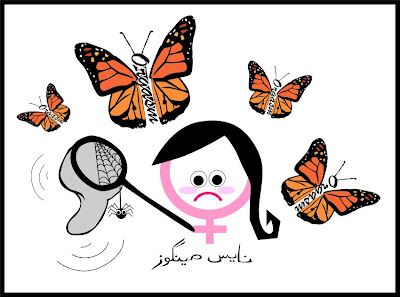 Mariam tells us that she herself has never climaxed through penetration…and I’m sure there are many others out there like her. And though there are other more effective ways to orgasm, there is still this pressure - The pressure that comes from society and the expectations that it builds. Your sexual experience as a woman must include an orgasm through penetration. If it doesn’t there is something wrong. Clearly Mariam feels that she is missing out on something…

“I mean, if I cant have an orgasm through penetration….I wouldn’t say my sex life as a whole is bad…but it does become a little…sort of … mundane…a little pointless…I do feel pressure…. I feel pressure to enjoy everything else…to make up for my lack of enjoyment in other areas….pressure is never good for when you’re wanting to orgasm in any case….”

The way I see it, an orgasm is an orgasm – no matter how you achieve it…but it’s true, society does shape our opinions of everything around us…it tells us how we should look, act and live our lives…society is an all-encompassing, not always right…tyrannical octopus. But during such socio-tyranny, we must often stop… and think for ourselves.

Gender inequality may have its roots in the bedroom, and biological factors such as childbearing, but much of it is a social construct. It’s all made up….and unless we constantly challenge these roles we are expected to play…we won’t move ahead. So challenge everything, think about it – and if it seems wrong, unfair and worst of all unequal…it needs to be changed. Women have suffered years of oppression, you would expect that by now…things would have changed…I’ll do my part by writing about female orgasms. Do your part by speaking out.

And if you've got an experience to share, please for the love of god, speak! You might change something for someone else. And if you don't have a story, maybe someone you know has, tell your friends, post this link on facebook - do what you can to get Pakistanis to speak and read about sex.

And if you're already reading this, you rock :) but you know, feel free to leave a comment ;)