As the Canadian federal election date draws closer, I can't get my mind off the niqab debate. I can't stop thinking about the fact that this one issue demonstrates how voices like mine - from within the Muslim community are routinely ignored, cast aside, betrayed by the illiberal 'liberal' West ...simply for the crime of not fitting the simplistic tribalist narratives.

Zunera Ishaq - a Pakistani immigrant to Canada just like myself ....took on the government regarding the issue of niqabs during the citizenship oath and won the right to wear a mask in court when no one else is allowed to. She won the privilege to flaunt her alliance with an inflexible, misogynistic, hardline, right-wing, extremist interpretation of Islam in the face of already marginalized, threatened, liberal minorities from within the Muslim community.

Widespread liberal support for her is as distasteful as support for 'White nationalism' or 'Straight Pride'. Except not many liberals can see past the 'minority' aspect. Well, the KKK would be a minority in Pakistan, but it wouldn't mean that we start treating them as liberal heroes if they challenged 'the majority'.

This issue showcases how utterly alone people in my position are. We don't align with the position of the western 'right' on so many things, we are orphaned liberals - abandoned by the left which usually champions 'equality' and free speech, stands against the religious right....unless....'Islam', we are thus pushed into a corner where the only people willing to listen to us are associated with the right...which is not necessarily a compromise everyone is willing to make. But if they do, you can't fully blame them for wanting to be heard.

After centuries of burning witches, imprisoning freethinkers, certain parts of the world have finally reached a place where science and rationality prevail - where in the interest of protecting equality, the religious aren't favoured over the questioning or the godless. For once. But again, regarding Islam even in the 'human-rights championing West', our voices are silenced, left out of the conversation, misrepresented. We continue to be marginalized, targeted with unbelievable bigotry from the left and the right. If we speak out against our own oppression, we are labelled 'native informant' or 'house arab' by the illiberal liberals.

We are seen as being from the same stock of foreign 'savages' by the far-right, and the conversation is hijacked by these two extremes; the xenophobes who wish to cast suspicion and doubt on all Muslims, or the 'liberals' who ally with our bigoted Muslim far-right, our oppressors.

I am left with an ache in my gut, and a sinking feeling when I see the hypocritical left, fight against victim blaming, slut-shaming but celebrate it in the form of niqab simply because it is not 'their culture', it is not their fight. Their fight is with fox news, Stephen Harper, and that's it. Their fight for equality ends there. Misogyny is acceptable if packaged as part of a foreign culture.

With their caricature representations of orthodox Muslims as 'authentic', they create a wider gap, they fuel the Us. Vs Them, they fuel anti-Muslim bigotry. It is not just the Conservatives (who perhaps oppose niqab for their own opportunistic purposes) that feed this fire, it is these hypocritical illiberal liberals too.

Crushed... are the voices who want progress within our Muslim communities.

This inversion of left and right is truly a bizarre phenomenon...

This debate in Canada has been going on for a while, and sure some cautious articles have spoken mildly about what the niqab may symbolize, and what a person who *chooses* to fight for it may be like, they have failed to include the voices of the oppressed in this dialogue. Mostly religious supremacists, who already buy into the misogyny are interviewed, or people from outside the culture making false equivalences to nuns, lip gloss and high heels are given platforms to speak.

On the other side angry anti-immigrant conspiracy theorists, or anti-muslim bigots are heard shrieking about how niqabs should be done away with. People from within the community who've personally been affected by forced modesty concepts in the religion are disturbingly excluded from this debate. Everyone talks over those who have suffered through this. And even women like myself who grew up in Saudi Arabia, who have seen morality police caning women's ankles for their hair showing - we are labelled 'bigots' for opposing our own oppression. It's sickeningly twisted.

I hear people on the radio say, "Prime Minister Stephen Harper must *STOP THIS NOW*, this is not our Canada, this is divisive", I hear people implying that he's responsible for the bigoted attacks on Muslim women. Its so intellectually dishonest to hold him responsible for the attacks (and no, I'm not a fan of his), because all he did was state fact, that this is a misogynistic practice. And it is - he did not condone violence or aggression or hate towards Muslim women. In fact, not addressing the obvious elephant in the room, that this regressive practice is harmful and disrespectful towards women, and the fact that it gives extremists anonymity privileges in situations no one else gets them, is what fuels bigotry. The longer these blatant issues go unaddressed the more the frustration grows.

No one is helped through denial and accommodating religious supremacy.

The idea that all opposition to the niqab is 'misguided' because people assume women are always coerced doesn't address those grievances that acknowledge some women choose this. It doesn't address the question, "what *kind* of person fights to perpetuate this?"

In this way, political extremist Islam, non-violent as it may be in this case, is given a pass...its given a foothold to establish itself, to grow and flourish. This is not just about the niqab, this is about the disturbing brand of Islam that is rapidly expanding across Muslim communities.

Naively I think, that perhaps these liberal (Canadian) media outlets are just not aware that a perspective like mine exists. So I reach out, time and time again, I am ignored. At times, others reach out on my behalf, with an interest in hearing the other side. Sometimes media outlets have contacted me for my views on the niqab, but as soon as they hear what I have to say the interview gets called off or 'bumped' or 'restructured' for some mysterious reason.

Ex-Muslims, we are treated like untouchables. Especially when its Hardline Muslims vs Liberal Muslims, the hardliners always, always get platforms, support....we do not fit the box of what the media wants to show as 'Muslim'.

Canada is not alone in this skewed regressive representation of 'Islam' or 'Muslim'. Even someone I admire like Jon Stewart - previously from the Daily Show, someone like him who made a career out of mocking the far right, the religious right....even he became guarded and uncomfortable when hosting a 'notorious' critic of Islam like Ayaan Hirsi Ali. On the other hand, he welcomed with great warmth a blatant apologist and spouter of idiocy like Reza Aslan. Jon hates being called a self-hating Jew, yet the suspicion he regards an ex-Muslim like Ayaan with is similar to that.

The situation in the UK is worse than North America, perhaps as a reaction to their far-right extremist nationalist groups...publications like the Guardian often misrepresent, censor or just exclude *true* liberal or ex-Muslim voices like those of Maryam Namazie and Maajid Nawaz. Ex-Muslims like Maryam Namazie are banned (then re-invited after public pressure) from speaking at Universities, when Islamists are welcomed without a thought. This is the attitude the niqab debate in Canada is representative of, not just 'a piece of cloth'.

Maryam puts it well in her piece recently censored published by the Guardian (emphasis mine), "Through Islamist Eyes":


"In their ‘anti-colonialist’ worldview, which unsurprisingly coincides with that of the ruling classes in the ‘Islamic world’ or ‘Muslim community,’ dissenters are either ‘native informants‘ or contributing to the ‘demonisation of Muslims.’
For those who have bought into the Islamist narrative, there are no social and political movements, class politics, dissenters, women’s rights campaigners, socialists… – just homogenised ‘Muslims’ [read Islamists] who face ‘intimidation’ and ‘discrimination’ if an ex-Muslim woman speaks on an university campus."
****
The level of intellectual dishonesty around this niqab debate has to be the single most frustrating thing I've experienced in a long time. This is not a 'non-issue', it is not a 'piece of cloth', it is about how real, living, breathing, women are treated in some branches of Islam. The least that can be done here is to *not* minimize the harm these practices cause, the least that can be done is to not applaud mockery of women's suffering. Someone, not even Muslim...has created an ignorant, dishonest tumblr called the 'Niqabs of Canada' comparing it with surgical masks, hockey masks, winter hoods and scarves. Things that have an actual purpose other than 'controlling women' or 'blaming them for men's lust', you know...the least we could do as Canadians is recognize that these comparisons are offensive. There are theocracies that whip and cane women for not being  dressed modestly enough. Surgical masks are not comparable.
It's beyond distasteful. I discussed this in my open letter to niqab supporting media, and here we are again, applauding insensitivity. 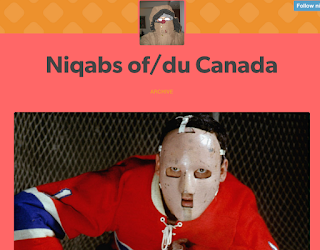 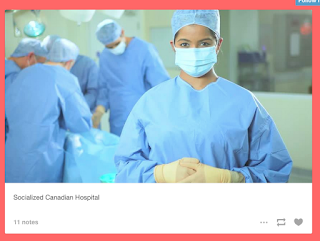 You are on the wrong side of history, and supporting gender segregation, you're going to look as stupid as those who supported racial segregation one day. I hope that day comes in my lifetime.

So please, continue dear illiberals, continue supporting our right-wing hardline bigots. We'll be over here waiting...for you to come around to your senses. Perhaps some day the progress and freedom of our communities will matter more to you than your political narcissism, where you simply must oppose 'the conservative', no matter what.

Thank you to all my wonderful Patrons, you keep this blog going.