In this world of ours, it is becoming increasingly hard to carve a path of reason for myself as an ex-Muslim. I find that I constantly have to walk a tightrope over the opposing waters of religious fascism and anti-muslim bigotry. Both of which I am personally affected by on a daily basis.

Yesterday, a quiet neighbourhood in Chapel Hill, North Carolina, lost three wonderful people; Deah Barakat, Yusur Mohammad and Razan Mohammad. They were gunned down in their home, by someone who identified as a vocal atheist on social media. Those three innocent people also happened to be Muslim... 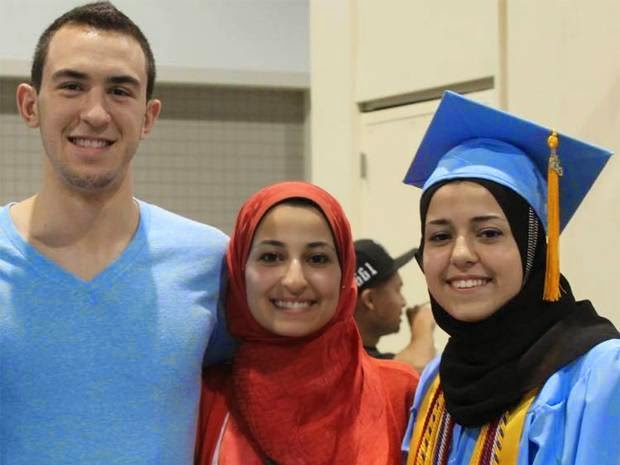 I cannot describe to you how this eats away at me, because I too am a vocal atheist and I too was born into a Muslim family.

I have seen an outpour of compassion from all kinds of people, Muslim and non-Muslim alike, atheist and non-atheist. I have also seen people on both sides of this use the incident as an opportunity to score a point or lash out in defensiveness. I have seen the anti-Muslim rhetoric rear its ugly head more times than I was prepared to see, coming from ‘rational’ people. And I have also seen the anti-atheists try to further their agenda in ludicrous ways, with the use of foolish false equivalencies.

I must admit, I am not shocked by bigotry and narrow-mindedness coming from ardent followers of texts that call for violence and murder. Sadly, it kind of happens all the time... Though I am baffled by how someone ‘rational' enough to abandon myth, can act in such a non-humanistic manner.

In the past day I have come across several calls for wiping out Muslims entirely, mass deportations, people calling ordinary Muslims a threat, people not even entertaining the fact that this heinous killing could have been the result of prejudices, to do with the victims’ faith. On the surface, it may have happened over ‘a parking dispute’ - but you would have to be in serious denial to not consider the involvement of other factors like religion, ethnicity, etc. This is not someone trying to put a spin on it, killings rarely do occur over parking. What was in the killer’s heart and mind that caused him to act in this way? Perhaps we will never know... We should definitely investigate.

On the flip side, I see plenty of atheist-haters smugly saying how Dawkins and Harris should apologize for this - since they want to hold the Islamic ideology accountable for it’s (very real and numerous) prescribed atrocities. With the increasingly reliable naiveté blame-shifting, apologist narrative of CJ Werlman and his oft-used recipe for attention - a dash of malice and a hint of slander, you get tweets like this (which he apparently realized was wrong himself and deleted within 30 seconds):

Aside from the fact that this is vile, it’s plain inaccurate. I cannot believe I’m having to explain what a false equivalency this is, over and over again. Dawkins and Harris are not the 'imams' of atheism (they had no trouble denouncing the act anyway, but thats not the point), and atheism isn’t a belief. It is exactly the opposite, a lack of belief.

Dawkins/Harris write books and articles, not commandments and scriptures that are meant to be seen as 'divine guidance'. They don’t claim divinity or want submission, they are fallible like the rest of us. The killer did not shoot in the name of his atheism either. But notice when someone kills whilst screaming Allahu Akbar, the media hesitates to call them Muslim. No one hesitated to call this guy an atheist - as they shouldn't.

Who are these atheists, and what do they believe? Well, let me put it this way;

A lack of belief in god(s) unifies people in some sort of ‘worldview’ as much as a lack of belief in mermaids unifies people. There is no doctrine about 'how not to believe in mermaids' .. there are no verses commanding non-believers of mermaids to kill people who daren't disbelieve in them. You can't blame everyone who doesn't believe in mermaids for the actions of one guy who doesn't believe in mermaids. There's nothing really common among them except for the disbelief in mermaids. Whereas a jihadist chanting "We have avenged our prophet" and a flag that says "there is no god but Allah", or a book that commands people to slay disbelievers.... those things can and should be held accountable, because depending on your interpretation, they are instructions straight from the holy book. Like it or not, there is nothing religion-like about atheism and I am so sick of this faux analogy.

I am also severely irritated and embarrassed by those who jump to say, frothing at the mouth, that this story wasn’t being given importance, that it wasn’t being given coverage…simply because the victims were Muslim. Thats a fresh pile of BS right there, because it was on every channel I flipped to and I came across countless articles on Twitter as well. In this Western country filled with a non-muslim majority, the turnout for these beautiful people’s vigil speaks for itself. Is this the 'lack of respect' for Muslims you were referring to? 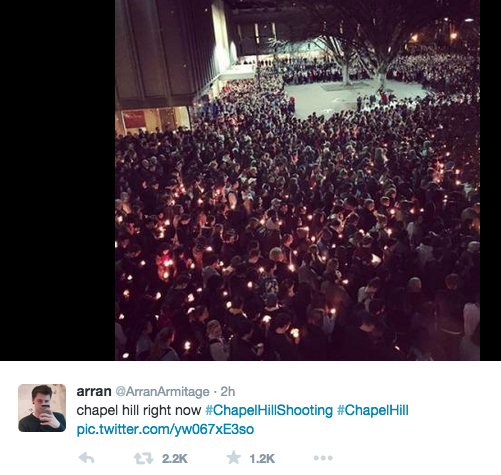 Do we have vigils like this for minorities in our Muslim countries? Do we honour the lost lives of apostates? Or do we join in the call for their death?

I’ll end with this; The killer was an atheist and I don’t think you’ll find many people trying to deny that. You won’t find anyone saying ‘he’s not a real atheist’, you hopefully won’t find disassociative hashtags like #NotInMyName and you won’t find many people making a fuss about an 'atheiphobic' backlash. What we should see is an increase of people distinguishing their critique of an ideology from holding individuals accountable. We should make an extra effort to point the difference out. Islam is problematic, not individual Muslims. Calling people towelheads and donkeyfuckers is not a valid critique of an idea. Violence is most certainly never ok ...and we should talk more about gun fetishization in the US. I read that the killer (Hicks) was one of those 'Guns don't kill people, people kill people' guys.  I have heard this same line about the Quran...

And if you wish to support my work and my voice, please do so here. I feel it is important for people to hear alternate views that are less popular in the mainstream. Please help make this possible.