Hearing nonsensical shit from the people of my motherland is nothing new to me, comes with the territory of being a Pakistani WOMAN writing a sex blog. Please see the gems I have compiled below to get a glimpse of why I think its so important to change this mentality:

This 'lady mango' is only writing about the stuff I come across... I am not actively trying to destroy the reputation of the country. The country does that without my help quite well :)

Hmm, I'm not the one humiliating/insulting pakistan (or Pakistanese) with the constant stories of rape, misogyny, child abuse, bomb blasts, etc...Sadly many prefer we remain silent about these issues rather than draw attention to them. They would rather keep their 'honour' intact than make any real change. FUCK HONOUR I say.

And really how could I understand why Pakistanis kill, rape and abduct their own people... because... I mean you could only understand that if you lived there. Because if you live there.. its totally understandable. However I feel I should mention I have lived there for a few years, and did not kill, rape or abduct a single person. But thats prolly cuz I'm so influenced by immoral Western values.

Ah yes, the glorious attention that you all shower me with. I mean you've seen the fan mail... who wouldn't want some of that?

I especially love it when we can't take responsibility for whats wrong with us...so we highlight the wrongs elsewhere in world. In pakistani math, you see.... two wrongs DO make a right. 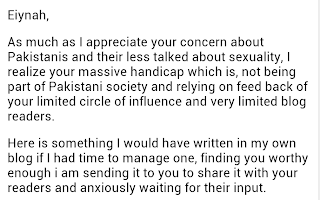 Haha heres a note from someone who found me 'worthy' enough to share some shit they wrote, despite all my handicaps that they were so kind to point out.

Ah just another lovely message telling me to die...and then shut the fuck up. Rather redundant I know. Im also extremely curious about wtf they think I've copied or plagiarized. They failed to have mentioned that - convenient ;)

Here's another bit of fan mail, implying that I have pinpointed the whereabouts of the majority of pakistani population. Funnily, this has never been a subject I've discussed. 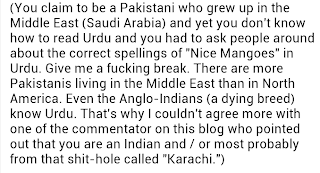 OMFG some Pakistani man thinks I'm "Smart enough" to lie about the bizarre shit I write about. Me?!! But... I'm just a ...woman...

And there are those who just say sweet things for no reason at all, or perhaps to give me a religious cautioning, because lets face it there will come a day where my breast will not 'look so much fun' and then maybe someday the other one will also not look so much fun...

And those who understand women so well.....

Oh.. no offence taken at all... who'd take offence to something like that? 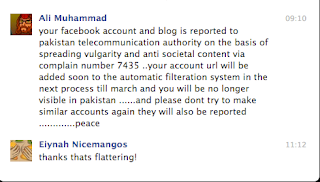 Those who try to censor my work and fail.... those are the best. Especially the guy who was going to start a parallel blog called Nice MangoEs...still waiting.

Here is a very excellent comparison of bestiality and premarital sex, because lets face it folks - they're pretty much the same thing.

However, nothing gives me as much joy as the pure nonsense... stuff that can barely be deciphered.

And for every 10 horrid comments... I get one that truly makes this abuse kind of worth it :)

Some times I feel jaded, and wonder if I should quit tho.... especially when I see the number of hits certain posts are getting vs. the silence around them, i can see hundreds and even thousands of you are looking - but If you don't share, comment or help spread the word.. we can never change this bleak reality.

I was recently speaking to a male reader who was telling me that my tone has become a little angry and bitter lately. Perhaps the above glimpse into my interactions with Pakistani men might give you a insight into why I may get a tad angry at the slightest hint of sexism or misogyny. 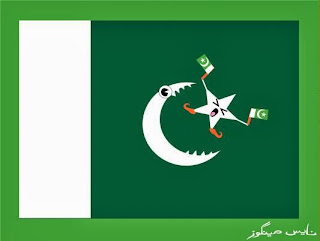