I ran across your blog while searching lots of interesting topics via the internet, and found it incredibly interesting. I'm a Caucasian female who was previously married to a Pakistani man for a disastrous period of approximately 10months. Although I am a Muslim, as was he, I guess I just didn't take into account that his raising in Pakistan gave him a uniquely arrogant view on sex, primarily, I dress up in sexy lingerie for him, while he decides to go at it with next to no foreplay whatsoever (does spread your legs count??!!), and then he expected me to orgasm just from that......

(If you guys are comfortable discussing foreplay, why not bring up the subject of oral sex as well? That way you won't be in for any surprises later on)

It seems like oral sex is something they [Pakistani men] really want to do, but may stay away from. I don't even think that it's religion that would keep them away from it, even if they are married, for instance, there is nowhere in the Muslim religion that states that oral sex isn't allowed, but then they will look closer at what some mullah is saying, that since they use their mouths in prayer, they can't do anything "dirty" like that with their mouths. Really, there is nothing unclean about it, as long both people are following basic rules of hygiene, and they still can't really use religion as an excuse, b/c if they look back at the Quran, and their own hadith, etc. there really is nothing from God stating that oral sex is unclean, and you can't do it, people assume.

I could go on and on about this, at least from the religious perspective, but in my eyes, at least if they're married, don't use God as an excuse if you just don't like it, just be honest, instead of coming up w/ excuse after excuse. I personally, enjoy it, aside from regular intercourse, and hope to be giving and receiving in my future marriage :)

Hope you can help me with my little question, thanks for your time, and keep up the interesting work on your blog! 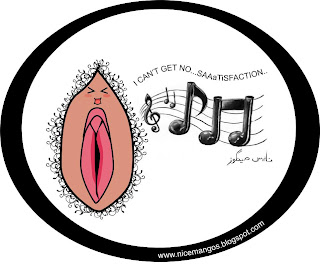 Now this rings a bell, don't it? Sounds very similar to Fahmida's situation. Like I've said before... its sad how ridiculously common this is....especially with Pakistanis. I've heard it countless times.

(I actually received this email before I put up Fahmida's story... so one was not influenced by the other)

Anyhow....recently, I was out for dinner with some friends... just soaking in the last bits of our fleeting Toronto summer.... sitting on a patio in Greek town...and I was telling them about the last post...when a male friend of mine (caucasian) looked quite surprised... he said something like,

"Really? I thought guys were willing to do pretty much anything to please a woman they want to have sex with...Isn't the opposite more common?"

Hahahah WTF! I was pretty taken aback by that one...I mean of course I've heard of women not being into it before... I've met some (very few) that say they hate going down on men, and some (like 2) that say they pretty much refuse to do it all together... but then I don't think they are expecting to be pleasured orally each time either. But to hear that there was an expression dealing with the subject was very surprising indeed. Mainly because i was like Whoa what a contrast to what I've been hearing lately.

I just began to wonder if there was a geographical divide to who performed more and received more...oral-sex wise. Could it be that where women are more often in subservient roles...that they perhaps feel its more of a 'duty' for them to do whatever (within socially/religiously acceptable boundaries) it takes to please their man in bed, and not demand anything in return? In contrast, could it be that where women feel more comfortable voicing their tastes/desires in bed  they are also more comfortable refusing?

However I did come across something interesting on Wikipedia, something I was totally unaware of:

Miscarriage reduction
Oral sex is correlated with reducing the risk of miscarriages by inducing immunological tolerance to the proteins in sperm, a process known as paternal tolerance. While any exposure to a partner's semen during sexual activity appears to decrease a woman's chances for the various immunological disorders that can occur during pregnancy, immunological tolerance could be most quickly established through oral introduction and gastrointestinal absorption of semen.[25][26] Recognizing that some of the studies potentially included the presence of confounding factors, such as the possibility that women who regularly perform oral sex and swallow semen also engage in more frequent intercourse, the researchers also noted that, either way, "the data still overwhelmingly supports the main theory" behind all their studies—that repeated exposure to semen establishes the maternal immunological tolerance necessary for a safe and successful pregnancy.[26][27]
----
Learn somethin' new every day!
Anyhow, Pakistani gentlemen...please do leave a comment for Meena... It'd be great to hear how you feel about Cunnilingus, maybe we can spot a trend and draw a (vague) conclusion. Though I'm pretty sure that my readers are not the best representatives of 'average Pakistani males' - it'll at least be a start.

For now, here's what my male interviewees had to say about oral sex:

Fahad, Male, 24
I'm very enthusiastic about oral sex :P – I think in society in general...all over the world, oral sex isn’t looked upon too favourably though. But amongst the people I hang out with I'm pretty sure that its just seen as another natural part of 'sex'. It probably seems like a “rebellious act” to people who don’t approve of it mainly because it’s a sexual act that is not linked to procreation.
To get to oral sex you need to be at least a little open to exploring.

Sultan, Male, 19
I don’t think oral sex should be forced onto anyone – if both partners are willing, then I don’t see anything wrong with it. You should take into account the other person who is performing the act of oral sex and their views and opinions.

Oral sex is a relatively…uh… lets say its forbidden in most religions and most people in Pakistan are religious in nature, that’s what comes to my mind, cuz sex is something natural and everyone does it but oral sex is something (it might be natural) but its something people are hesitant towards. But not me.

(An interesting opinion Sultan...sounds a tad confused at times... but  you're still young)

Khizer, Male, 26
I think it’s great. Love it. I think it works both ways, I don’t see why someone would expect it if they weren’t willing to give it as well. It’s a mutual thing.

Imad, Male, 25
Oral sex is great – both ways. More often than not… I think sexual intercourse is an equal act – based on both people’s pleasure. But there are days when you’re lazy I guess… (Laughs)

(Having an off day is perfectly natural I think, not everyone is up for everything all the time, but if someone is constantly inconsiderate towards their partner in bed... thats definitely an issue that extends outside the bedroom)


(Thinks for a long time) I'm ok with it....i dont see it as being anything wrong... it involves 2 people and if they decide to go down that path then yes. There are times when that would seem like more of an easier way out kind of a deal...

('Go down' that path indeed :P pun not intended I presume?)

(You do seem a little hesitant though...I wonder why...)

NJ, 42, Male
It’s a turn on for me and I will say that since I am more into smells; it depends if her juices are sexy smelling I like to lick her deep inside and I also have fantasy of licking sniffing female asshole even when I am typing this it makes me horny hard rock thinking of desi girls ass and feeling smell of  her slightly dirty ass. But if a female or younger male  have bad breath or foul down smell it will turn me down.
(Of course NJ, relevant and to-the-point as always. Thanks for your descriptive detail. A real piece of work)

Bilal, 24, Male
Why, i rather enjoy it. Honestly - both giving and receiving. Its lots of fun as well hah (oh boy i feel ever so slightly sleazy for admitting to that)

(No need to feel sleazy at all... why does it make you feel that way?)

S.K.A., 28, Male
Oral sex is only natural. Very much part of a healthy sex life.

Hamid, 24, male
I absolutely love it. I don’t think it should be considered less than penetrative sex.

(Often provides more orgasms for women than penetrative sex does..so it definitely should be considered a part of the 'sex equation'.)

Arsalan, 20, Male
It abhors and disgusts me, I don’t know why, but I am not just ok with sucking a woman’s clitoris or whatever. Oral sex disgusts me. I don’t think I could respect the girl who once had my dick in her mouth.

(I appreciate your honesty Arsalan, and at least you find it disgusting both ways...so you're not a hypocrite. But I'd just like you to think about why it is that it bothers you so much? Because you give no reason for the hate...ps there's a lot more to it than sucking a clitoris, and one doesn't necessarily have to suck the clitoris at all)

Once again, it'd be much appreciated if you leave a comment for Meena... :)
Posted by Eiynah at 9:52 PM