Every religion apologist, or more specifically *Islam apologist*, likes to feel validated for claims of constant victimization. They love it when they come across an 'atheist' that personifies the bigotry they accuse us all of. There aren't many atheists that I know who've left behind bigoted ideologies to align with other bigoted ideologies...but those that do exist are pure gold for an Islam apologist.

For the past few days the Vive Charlie / Jihadist Joe crew has been terribly furious with me and other secular bloggers for calling out their problematic ideas and associations.

Jihadist Joe is a popular 'satire' twitter account, that critiques 'Islam', but ends up being more anti-Muslim than anti-Islam. He is also one of the founders of Vive Charlie, which is a seemingly far-right, anti-migrant, anti-muslim magazine. It was set up after the horrific mass shooting of cartoonists at French satirical (left-leaning) publication Charlie Hebdo. Sadly, out of ignorance...Charlie Hebdo is too often accused of 'bigotry' and 'racism', as many critics of religion...especially *one* particular religion are. If anything lends credibility to such false accusations, it's publications like Vive.

The difference between a critique of ideology and a critique of entire groups of people is lost on too many - on both the left and the right. The left conflates any criticism of Islam (the idea) with racism/bigotry and ends up pandering to the Islamic far right which is deeply troubling. The Western far right however, lumps together all *Muslims* and tries to pass it off as legitimate criticism of the ideology, also troubling.

In the middle of this 'hate-sandwich' you have ex-Muslims like me. We are called self-hating bigots, 'native informants', 'islamophobes', 'uncle Tom', 'house Arab' by the left...and we are called 'overly PC', islam-apologists by the far right. Kind of impossible to be both...

Ah yes, my penchant for political correctness must be why my work is often censored and why I receive a constant stream of death threats.

The way I see it, ideas don't have rights, bad ideas should be discussed and mocked without hesitation. Groups of diverse people however, should not be unfairly generalized.

It sounds simple enough, but it isn't for some. Either they just don't get the difference, or they are knowingly bigoted.

Below I will share screenshots of interactions with the Vive Charlie gang, and you can decide which it is in this case.
---

It started when they were caught with their hands in the bigotry jar, teaming up with and endorsing Katie Hopkins (who happens to think migrants are like cockroaches and viruses). You can read my previous piece on that here. They were then proven to be dishonest by Sam Harris' confirmation that he did not agree to write for them, as they had falsely claimed. 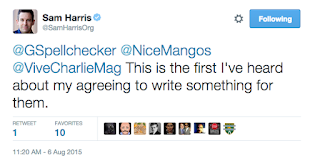 It was more disturbing to discover that their upcoming Mohammed drawing contest had a known racist guest speaker (Paul Weston), who is on record talking about his ideas regarding 'White Genocide' and how Muslim immigration will cause white Europeans to become outnumbered. 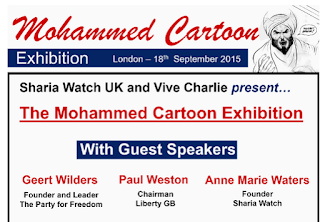 He's also on record in an interview acknowledging he wants to ban Muslims from public office.

Another fine example of the embodiment of Freedom of Speech (which this event is all about, of course) is their other guest speaker Geert Wilders (a Dutch politician) who is also anti-Muslim immigration, and wants to ban the Quran.

The utter hypocrisy in wanting to champion 'free speech' while having guest speakers that want to stifle it ...is remarkable. And the idea of banning something kept personal is too reminiscent of religion for my taste.

Extremism in all forms is horrendous... and no, I'm not equating racism/bigotry with murderous jihadists, one is clearly more harmful, more urgent. But bigotry by definition is anti-equality and therefore anti-secular. Some will mask it by accusing anyone who opposes their actual 'proof-in-front-of-your-eyes' bigotry of Islam apologia - which does exist in excessive disproportionate amounts. That certainly adds to the confusion.

Its not whats happening here, but it is a very convenient excuse to have...

Here are some lovely tweets:

They claim that they are being bullied with attempts to 'censor' them...or that their freedom of speech is being stifled just by others having an opinion...let me clarify (again) that none of us actually oppose the event or their publication's existence. But, freedom of speech doesn't protect one from 'criticism'.

For someone that thinks everyone who disagrees is just a whiney cunt, he seems to get upset really easily. There was attempt to reason....the level of interaction was not very mature. 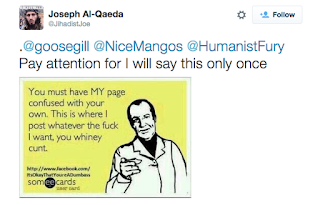 Some conversation was attempted...to address the actual issue of 'if you're not an anti-muslim bigot, why are the speakers at your event known bigots and a racist?'

Paul Weston's racist and anti-muslim views are pretty relevant if one wants their criticism of Islam to come from a place of secularism and intellect rather than a place of outright hatred. Its not about 'sharing a platform'...you're not two parties attending an event...you're co-hosting the event and *giving* them a platform. If you invite anti-muslim bigots to criticize Islam, its just not going to seem like a credible 'secularist' perspective. Sorry. Amuses me that they confirm and stand by their guest speakers with such confidence. Because just the day before, one of their contributorswas trying to tell me they are trapped and unable to pull out because they have been threatened with a lawsuit.


Anyway, after all this anti-muslim stuff....to support people like Badawi or retweet Maajid Nawaaz's articles, comes off as hypocritical and self-serving once again....so are *Muslims* stupid pedo goatfuckers...or are they sometimes people you'd want to support and not alienate?


One thing this whole incident indicates is an absolutely HUGE failure on the left's part. A failure to call out the problematic parts of Islam, a failure to try and dismantle the power it holds over the world today....a failure to show enough solidarity with murdered cartoonists...with those oppressed by Islam...

If the 'liberals' aren't stepping up and defending free speech...then we're going to get people allying with white genocide lunatics, anti-Muslim conspiracy theorists, the frustration will increase bigotry towards those few truly progressive Muslims already marginalized by Muslim bigots.

Its time for the left to step up to the plate. And create a distinct, secular liberal discussion around Islam. We need to be honest and not shy away from it. And its also time for actual 'secularists' to reflect upon whether supporting publications like Vive Charlie will help in starting honest discussion around Islam, or will it just give the apologists fodder to continue shutting down all debate with cries of 'Islamophobia', as well as provide cover to people with anti-muslim, not secular agendas.

We need to stop letting extremists on both sides, or extremist-sympathizers control and shape the narratives in this discussion.

Thank you to all those who support my work. You too can support via Patreon here