Should Surgeons be Fasting while Performing Surgery?

While on my *favourite* social media site, Facebook (sarcasm) ....I came across a photo posted to a group dedicated to exposing medical negligence in Pakistan. 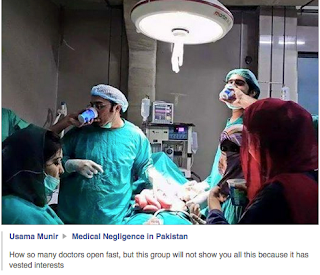 I'm glad such a group exists...because while there are many wonderful, selfless doctors in Pakistan, the number of unprofessional, religion-before-science 'doctors' that continue to practice there is ridiculous.

I've had some interesting run-ins with Pakistani doctors myself in the past. Some complained that my promoting condoms and safe sex offended their delicate religious sensibilities. Some patients came to me for advice (even though I'm not a medical professional) because there was no where else to turn - Since too many doctors in my motherland think 'unmarried women' should not be given pap smears. Others have proclaimed they have no shame in judging a woman's character/morality if she comes in for something 'taboo' like an std test.

Seriously, you'd think they were a bunch of ignorant, judgemental highschoolers..not adult doctors.

Anyway, the point is we have an alarming number of terrible doctors in Pakistan. And it's not entirely their fault either, they've had their brains clogged up with ancient magical beliefs since they were kids. Every waking moment of their lives, those beliefs have been reinforced. They're taught to bring religion into everything they do...even science.

Going back to the picture I posted above though - It was shared to the facebook group as some kind of defence of how noble these pious doctors are (as a demonstration how not all doctors are negligent). Operating on people while fasting in the holy month of Ramadan...only turning to sip water to break their fast *during* surgery.

This should obviously be applauded *eyeroll*. No food or anything to drink for over 10 hours...and they're still ready with scalpels in hand...to cut you open and perform the most intricate, dangerous procedures.

This photo had the opposite effect it intended to.

(Granted, if these were non fasting doctors who just wanted a sip of water, this photo would be perfectly fine. But the idea they have not eaten or drank for hours on purpose before the surgery is a disturbing one.)

I would certainly not want a starving, thirsty doctor cutting me open. I would want them to be on their A game, not give themselves a handicap purposely. This picture realy got me thinking, why had I never considered this before? It's a terrifying thought that someone could be drained, exhausted, dehydrated and also responsible for your complicated c-section/heart surgery/brain surgery.

Fasting for people cutting open other people should not be allowed. I wonder if it is in Canada, is this something people could yell "Islamophobia" about? I mean it's common sense really. If you have someone else's life in your hands do not purposely starve yourself, so that you can concentrate fully. Why would you put an added risk on someone else? It's ridiculously unfair. One of those times where people really need to keep their relationship with god between themselves and their skydaddy. The person on the operating table should not suffer because of your faith.

Anyhow, I went googling for some answers....couldn't find much except for the needed pre-surgical fasts for patients. I did find a few religious sites talking about it however. One where someone posed the question, "if a surgeon was mid-surgery at sunset (when the fast is broken) could he wait till after to break his fast" And they were essentially told no, that it was important to break the fast right at sunset. Fine, fine if there really wasn't a way to stop and eat mid-surgery, then they could delay.

It's mind-boggling really, it's as if surgery is some secondary thing to these people. What's important is that these ancient rituals be fulfilled exactly on time. Surgery? Meh... that can wait.

Then there was another question asking if a surgeon who couldn't concentrate properly because he's fasting, was allowed to break his fast so that he could, you know...do better, save more lives....

This person was also basically told 'no'. Instead they were given some ridiculous suggestions like;

The religious post starts off saying its 'obligatory'...So that doesn't leave much wiggle room does it?

Praise be to Allaah.
Fasting Ramadan is obligatory for every adult, sane, non-travelling, healthy Muslim, because Allah says (interpretation of the meaning):
“O you who believe! Observing As-Sawm (the fasting) is prescribed for you as it was prescribed for those before you, that you may become Al-Muttaqoon (the pious).
[al-Baqarah 2:183, 184]
I certainly hope that neither myself nor my loved ones (or anyone really) ever have to have a fasting surgeon. Ever. That thought is terrifying. Being cut open is terrifying enough, being cut open by a starving, dehydrated person....is a whole new level of terrifying.
Religion, you never fail to surprise me.
While googling things about surgeons fasting, I also came across this:

And what in the fuck. Why is this even a question? Why do these idiots 'differ' on this? I know someone with asthma, and when they need their inhaler...they need it. They are having trouble breathing, and breathing is kind of important. What is the point of a fast that will almost kill you? What kind of god requires that you are almost asphyxiated to prove that you are obedient to him? This question should be a no-brainer. If you need medication, take it...no questions asked - except for "should you be fasting in the first place?".

This past June, over 1400 people have died because of a heatwave that hit Pakistan....during Ramadan. People were fasting...there was no electricity, no nutrition, poverty, no water....death. Some of which could have probably been prevented if the government or religious clerics had warned beforehand to *not fast* in such conditions.

Please think twice about when you're fasting, whether you have any medical conditions, if you are breastfeeding a baby, or if there is no electricity....if you are a doctor with someone else's life in your hands. Think.

If you must religion, do it thoughtfully.
-----
A huge thanks to my patrons: Fred, Martin, Steve, Ruthless Atheist, Katrin, Berivan, Harpreet, Lisa Fontaine, Humanist Agressor, Jesus&Mo, Pastafarian Woman, Mb Cunney, Ali, Leneke Van Houten, Alberto, Jakob and Yasmien - your support means a lot and will help me allocate more time towards writing and drawing!
It is imperative we start questioning the ancient beliefs passed down to us, especially in places like my birth country Pakistan. Please help me share more stories like this one, by supporting the blog here !