Necrophilia in the land of the Pure....again...

So our ultra hypocritical, denial-filled, holier-than-thou country has yet again (in the span of a couple of years) made headlines because of necrophilia.

Surprise surprise, we aren't all gods favourite, holy people after all. Come on, you can look down on the west for being 'immoral' and what not... but Pakistan, take a look in the mirror for fucks sake. You're the one that claims to be a cut above the rest of all humanity... with your religiosity and morality.... your 'respect' for women, mm hmm.... it's apparent. 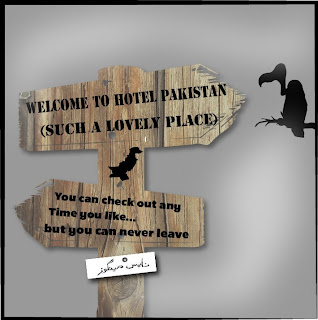 Just the name of the country is a fucking sham. "Pakistan" = "The land of the Pure" .... we should change it to full-of-shit-istan ... or hypocr-istan .... those would be far more fitting. Alright alright... don't get your senselessly patriotic rectums in a twist. Of course there are good people and good values there.... no one's saying that every last person on that landmass is a scumbag .... but generally the moral compass is dubious.... there are many reasons for this of course; poverty and illiteracy are a lethal mix... can cause a lot of people to do shitty things. So rather than pointing fingers elsewhere...and saying well... at least we don't have strip clubs or whatever... take a good hard look at yourself Pakistan. Only once we admit the problem will we be able to make any progress. Don't make excuses for how fucked up it is. Just acknowledge that it IS fucked up, and that'll be a start.

You'd be surprised at how many people refuse to hear anything bad about a country where almost 25% of the people I know have had a gun held to their head (that is not fucking normal)... where women can't walk down the streets at any time of day and feel safe...where people are shot for speaking out about religious freedom, and where their killers are celebrated... where little girls are shot in the head for wanting equal education rights... and lately, female corpses of teenagers are desecrated. Holy fucking shit...if you still think its a great country, and that there is a reason to be proud of it... YOU are part of the problem.

Oh and i'd put a hefty sum on the fact that those guys probably don't drink... cuz you know that's immoral.... fucking a dead girl? Meh....women are just objects of pleasure anyway...what would she care if she's dead anyhow right? I mean where else would they get access to a real life female body again in the near future....

Sick fucks. I hope their corpse-defiling dicks fall off cuz of some maggot disease.

I was having a conversation with a pointlessly patriotic relative recently and he believed that we should abolish co-education in the areas the taliban wants to abolish it - because at least that would spare us some bloodshed... just by giving the terrorists what they want. Not at all thinking of what long term effects that would have.... I mean... when genders are unnaturally segregated for extended periods of time over their lifespans they are not socialized into interacting with one another.... couple that with an insanely patriarchal society where it is the norm for every aspect of women's existence to be controlled.... and you get shit like this.... where men don't respect women enough even in death. I mean.... necrophilia elsewhere is a specific kind of paraphilia (as much as i dislike this word for its misuse, I think here it is justifiable)... a 'deviance' where something in the brain is motivating you to fuck the dead... in the Pakistani cases... i think it's just the lack of access to 'alive' female bodies that drives them to this behaviour.... Im no psychologist... and there are certainly no studies about paraphilias in rural Pakistan... but i'm pretty satisfied with my theory that its simply a manifestation of repressed sexuality in these cases. If you have another theory I'd love to hear it.

I mean I loathe segregation.... forced segregation....I get that some people for religious reasons would want their kids in all-boy or all-girl schools.... and they should have a choice...but what about those people who don't mind their children interacting with all kinds of humans irrespective of what sort of genitals they have? I believe they too should have a choice.... to abolish any chance of that happening is making a sick country sicker.... there are already too many repressed boys who will salivate at the sight of just a bare wrist like its a fat steak... in order to teach them that women are not to be 'devoured' and instead treated like humans... they would first have to be used to the mere existence of a female body....right?

Bottom Line: Dead or Alive....a woman is not up for grabs...

Step 1. Get used to the idea of women

It can only happen in baby steps.... I realise that. So for starters... don't get all defensive about what I said here because you know its true. Pakistan has regressed not progressed... try to get comfortable saying that in front of the mirror and maybe you can be part of the solution.