A preacher, A singer.....and S&M in Pakistan


I saw a pretty upsetting video today, and here's a little background info - since some of u may not be Pakistani...

Our nation has been blessed with a scrote of a guy called Amir Liaqat, our first televangelist really... he's an arrogant, hypocritical man who caused a scandal last year when he was recorded cursing and saying all kinds of 'non-Islamic' things between takes...he's also been heard saying hateful things about minorities...unsurprisingly.

Somehow that same dude has been rehired after his exposé and is back with a hardcore Ramadan Circus variety? show it seems.

On the flipside, Pakistan also created the internet sensation known as Taher Shah. If you have not seen the video responsible for his fame, I suggest you do so. It will be time well spent. 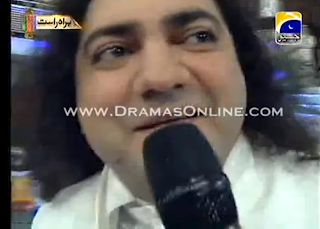 Now Taher Shah's reasons for internet fame can be dissected and discussed to death....but that's not what this post is about. Give him a break.

Oh and yeah yeah, I'm aware I'm 24 hours late talking about this... old news and all... but guys, I live halfway across the world from Pakistan... and I don't ever watch Pakistani TV, the fact that I even give a fuck know about the recent events between these two men is a Ramadan Miracle.

Anyway back to the issue. The video involved Singing Sensation Taher Shah being invited on to Mr. Televangedick's stage, to perform the song that made him famous. Sadly, he wasn't invited to perform at all. He was invited to be made fun of. This supposed religious man, who's poisoning 'guiding' more than half of pakistan through their holy month with his bs, mocked the singer as he attempted to sing... in the most inhumane way... total public humiliation... grabbed his hair and floofed it about... forced the man to wrap a snake around his neck (and what in the holy FUCK was a snake doing on stage during a religious show? - do they just keep one on hand to remind em of the sins of adam & eve? or did they fucking bring it in knowing they were going to taunt this poor gentle soul with it? 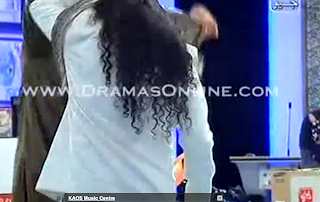 I mean just the guys body language was repulsive ... and so fucking unprofessional for a TV host. The way he spun Taher Shah around so people could see the hair that he was making fun of.

(TS: ur hair is great, dude, I hear its very hard to maintain non-frizzy curls... and u aren't doing such a bad job. And fuck that must've taken forever to grow out! Don't let em get to you, however you did it... you struck a chord with the world, you became an international viral video maker... kudos to you for puttin' us on the map for something that doesn't involve death and killing!)

He shoved his face into TS's face while the man was trying to sing... i mean fuck... did you invite him on to sing or not ? Certainly didn't let him sing in peace for a second. 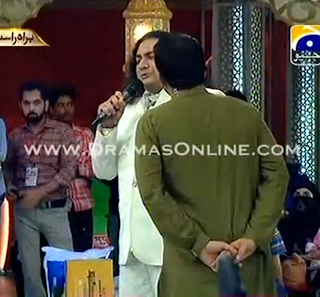 He even wrapped his arms around the guys waist for shits sake. 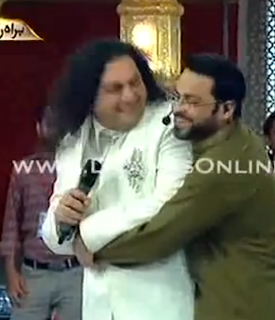 I get it televangedick, this might be the most action you get EVER... but.... TS has standards... he most certainly didn't appreciate your non-consensual fondling.

TS came out on top tho. He handled it pretty gracefully... and he was just really sweet, gentle.. and charming...I've totally got a soft spot for him now. :)

Every one deserves a basic level of respect. It's called human decency. You can't invite someone into your space and publicly mock them. Especially as a person of 'faith', tsk.... what a bad fucking example of humanity you are Amir Liaqat.....and they let you preach morals to people? Get real Pakistan, WTF is wrong with you? Boycott this asshole now if you didn't during his last bout of public dickishness, where he claimed the videos released were doctored *eye roll*

Shame on the channel who hired him again...if these are your preachers and teachers of morality, Pakistan... no wonder you're in the state you're in. 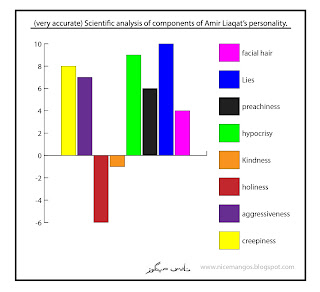 If there was ever a time for some good ol' fashioned Religious flogging, its gotta be this.
(And that ain't the kinky, consensual, good kind of flogging either)

Anyyyywayyy.... speaking of flogging.... and this time the kind that involves consent,
I got an interesting email recently...

I started looking for other places to go to. I finally went to a munch that is organized in the DFW called Fourth Friday ( i think it is still in operation). I went to their party after it. I found some play time with someone but as I was not really known in the scene, i could not make friends or anything. I was a bit shy and scared too, being young and all. anyway i went to another of their event two months later. and then i moved to NYC.

In NYC, I went to PaddlesNYC. It was a friendly place.  I went there a few times but NYC being very expensive, I could not go there all the time. However, I did go there from time to time and participated in the activities too. but since my studies had finished, I had to relocate to Pakistan soon. and since then i have been trying hard to assemble some people in Pakistan.however i have not been able to do so.the main reason is that people are not very open. women especially wont come out and talk to you about it. and then there is the fact that even though people want it, they simply dont know that such things are liked by others and have a name too. through this blog i hope to reach that part of our society. 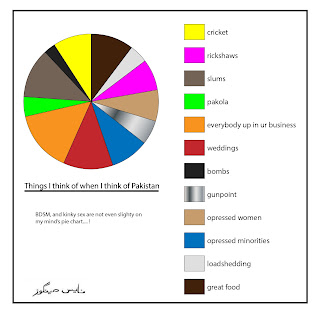 So if anyone out there in pk is into a little kink, a little B, D, S and M... send me an email and maybe I can put you guys in touch.