Women are not Objects...

I know, I know it's been a while since I last posted.... but I've been busy juggling so many things, you have no idea.

Anyhoo...I'm back... and hopefully will keep posting :) Especially since I have so many interviews and stories to share. Thanks to everyone who has written in. Thank you for your patience...just bear with me for a little bit...and hopefully u'll see ur story up soon.

I wanted to share an interesting Tumblr I came across on twitter (courtesy of the lovely @Bhaichod )... The writer is an illustrator, blogger, advice-giver and a niqabi, who goes by the name of 'Little Miss Islam'! I know right, wtf indeed. I thought that the fundamentalist, glove-wearing, face-hiding types were not supposed to draw living things because of the the erm,, 'haram factor' ?...

As mind-boggling as this sounds, I will leave you with some of her rather ludicrously wonderful (in an ironic kind of way) illustrations....

(I have seen on her blog that she tells people they can share her pictures as long as they are credited to her and not altered in any way, so I am taking the liberty to share them here under those conditions. I will add my two cents at the bottom of 'em tho :P) 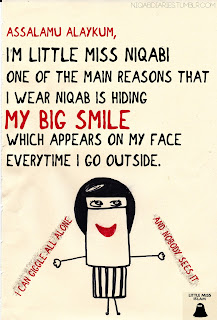 Oh dear, the niqab is an excuse to hide your smile? Thats the first time I've heard that! But why? Why can't women express something as basic and human as 'joy' ... why must even that be covered up and controlled? 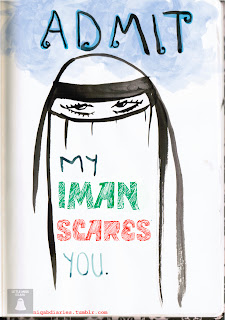 I will be the first to admit that it does. I'm not sure if it's the 'Iman' exactly, but something definitely scares me and makes me feel uncomfortable. 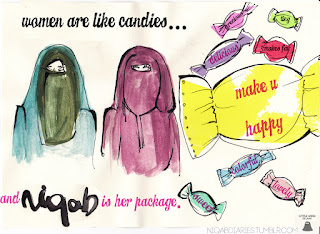 With all due respect, Little Miss Islam. I'm not sure I appreciate the objectification here. I am a woman and I have a functioning brain...I am most certainly not like an inanimate object that is meant for consumption. 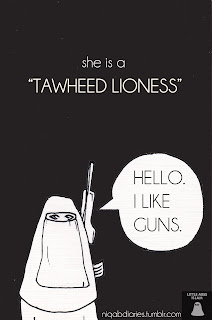 Uhhh....Wtf?! In reference to the picture above where u mentioned something scaring me....perhaps this was it.... this definitely scares me. 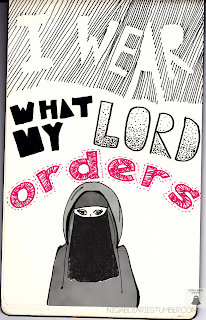 I have to admit, I heard the exact same sentence at a fetish night once. Yup, the person in question was wearing a rather medieval looking harness.. 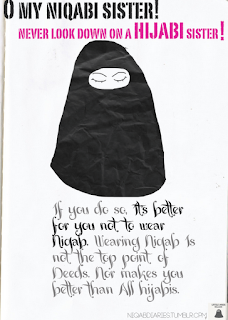 Wow what? This is a thing? I didn't even know this was a thing... Some niqabis look down on hijabis? Why can't we just be happy that they are making an effort to be pious in the first place? 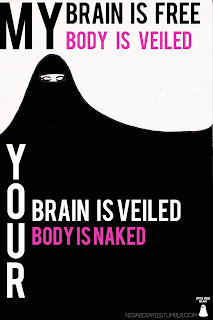 And I saved the best for last, this is by far my favourite illustration. Little Miss Islam, if this is for sale, I would like to purchase a print. It'd look great in my study. :)

To find more of these awesome doodles visit: http://niqabdiaries.tumblr.com

Whatever your view on religion and feminism is, you gotta admit she does draw really well... and its bizarre to see little illustrations of niqabis. Whether she intends to be humorous or not, I'm not entirely sure....either way...her work makes me smile.

But now that I've talked about something lighthearted.. its time to get serious. I did an interview with Tanya not so long ago and it broke my heart... once again...

The reason i like to put something less serious with something more serious is to not get you all down and depressed, so that you're more able to face the horrible truth; the fact that our country is full of sexual abuse. We may try to hide it and continue living our lives as if none of that occurs in Pakistan, as if that's mostly a problem in the West... but it's everywhere...it's time to start acknowledging it. Speaking out about these things is the only way to break down the taboo associated with sex abuse in our society. The more and more comfortable we get engaging in discussions about it, the more likely the abusers are to get caught.

Everyone that comes forward and speaks out, brings it one step closer to breaking those barriers.

However, if you're easily triggered by stories of abuse, now might be the time to stop reading.

At what age (approximately) and how did you come to know about sexual intercourse?

I was 12 when I overheard girls in my class discussing the mechanics. Sounded absolutely pointless and kind of disgusting. I remember one of my first thoughts was, “That is not something my parents would do.”

Is Pakistan sexually repressed as a nation?

A country that looks down upon chaste, heterosexual couples hanging out in public, but indulges in pornography, prostitution, homosexuality behind closed doors? Yes, quite repressed.

Have you ever had/Do you enjoy having sex?

My first time, I was raped by someone I trusted. I was 18. I have not been able to enjoy it since.

I'm heartbroken to hear this Tanya, I am every single time I hear a story like yours...it never gets easier to hear about someone else's pain. And to live through it, must be a struggle every day still. I'm sure. I just hope you have a good support system of friends and family. I hope you are not afraid to share this information with the ones you care about most - because it would be quite a burden to carry on your own. I also sincerely hope that you have told someone and that someone has taken some action against the asshole. Has he been confronted, caught and/or sentenced?

It is very often someone you trust, thats how they get to you. My friend in university went through something very similar in her past... and it was one of her best friends that raped and beat her. Its sometimes hard to know if its the betrayal or the physical abuse that hurts more...

Its awful but completely understandable that it has had a lasting effect on your sexuality. But with time, patience, trust, love....these things can mend. The human body and mind are more resilient than we know.

I’ve changed my stance on this over time. Used to be against, now I’m indifferent to it. Matter of personal choice – as long as both partners are consensual and are practicing safe sex, more power to them.

Have you had more than one sexual partner in life?

There’s absolutely no strict definition what gives either party pleasure. It’s not necessarily equality in the actual act itself, but I do believe that any good sex involves both parties coming out with at least an equal amount of satisfaction.

Have you ever experienced a multiple orgasm?

Have you ever found or had your g-spot found?

Found it on my own, after many years of avoiding exploring for it. Still haven’t been able to achieve “maximum potential” I think ;)

Just the fact that you are trying and succeeding shows that you're healing. And I'm glad to hear it. Many women actually never find it, some say its a myth... the fact that you found something says alot about a lot. :)

Do you know anyone who has sex but has not yet experienced an orgasm? What are your thoughts on that?

It took me 4 years of reconciliation with my rape to be able to come to a point where I could achieve orgasm, and even then it wasn’t with another partner. Still a long way away from recovering, I guess.

You may feel like you're a long way from recovering, but the fact that you got over a four year period where you couldn't have an orgasm, shows that you've come a long way too.

Do you think about sex every day?

At least once or twice a day.

Do you think sex plays a major role in your life?

Not particularly, but sexuality does.

Would you morally, ethically or in any way, have a problem with marrying someone who had had sex with someone before you?

As long as the person has no issues with getting tested, absolutely no problem.

Won’t go into technicalities of how it’s shot and the ethics behind its availability, but I’m generally in favor of it, whether alone or with a partner. No harm in safe external stimulation.

What are your thoughts on homosexuality?

I personally subscribe to the Kinsey school of thought. Life would be a lot easier if people stopped identifying under any particular label, but admitted there’s a certain degree of homosexuality and heterosexuality in everyone.

Do you think education is important, when it comes to something like sexuality?

Absolutely. Ignorance and abstinence-only programs lead to dangerous situations. If we were more open about discussing these things and educating the youth about them, we’d be able to avoid a large number of unplanned pregnancies, STDs and quite a number of life-threatening situations. Of course, for such education to exist, there needs to be better legislation and protection.

What kind of role do you think sex plays in religion?

I think sex is a strictly perfunctory act in religion, used for procreation and, in most cases, for tethering partners together. Think of it as a kind of branding or marking of partners as one’s territory.

Do you think we have a problem in this country with sexual predators and Paedophiles, and to what extent, in comparison with the rest of the world?

Absolutely. Like I mentioned right near the beginning, it’s a repressed society. There’s going to be a significant amount of unethical perversion and looking for whatever outlet is available with the smallest amount of repercussion. Not to mention that the domination and the terror it causes is an addiction to many. I do think there’s a greater extent of it here, but that doesn’t make it a uniquely local problem in any form.


What are your thoughts on oral sex:

All for it (if consensual, of course).

Thank you for sharing your story Tanya. I'm sure its never easy to share an experience like that, but its important...and I'm sure you've reached some people that went through it too.