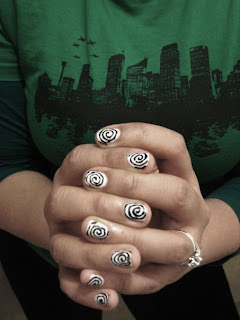 So we were just passing by this swinger's club booth...stopped for the sake of curiousity - the guy mistook it for genuine interest. He started chatting with me about how its safe and clean and they have rules.. etc etc... they only let couples in.. and even then they have the right to refuse anyone based just on their appearance...

He looks me and my husband up and down... and says "you two would get in, easy" .... hahah wtf.... I wondered what made him say that.... do we look like swingers? What do swingers look like? Maybe my skirt was too short...maybe its cuz of my piercings and tattoos - those are often the reason for people to jump to conclusions about me. But whatever... it made me laugh.

We drive past that club sometimes and joke about going in. But its only jokes...seriously, I don't have it in me.

Definitely not as sexually liberated as Aleena.

But now we've talked about the light-hearted stuff, I'd like to get serious again and bring up the un-talked about topic of Child Sex Abuse in Pakistan...It doesn't just happen to girls, here is another story. This time from a male perspective:

My comments focus on situations where children are left alone with servants or other strangers/maulvis/family members but I think the crux of the problem lies in a lack of sex education in our society and the fact that parents never talk to their children about sex or sexual abuse. There is no equivalent term for "the birds and the bees" in our society and it's sad that they would rather risk their children's safety and future well being in return for living with their comfort zones and taboos. The only sex-ed that takes place is between a mother and her daughter about periods and puberty and some mothers even delay that until their daughters go through a traumatic and unexpected onset of puberty.

I've been wanting to share my experience since some time now, since a lot of Pakistani parents leave their children with "trusted" servants or maids or think that their children are playing alone in the afternoon while they sleep. I feel children should not be left alone with anyone for an extended period of time, either inside the house or while being picked up by drivers from school etc. as this is the ideal setup for random or sustained sexual abuse. It just takes a few minutes for something to happen and children don't need to be away for hours in order to be raped. That's something that we all need to realize and be a bit paranoid about.

Parents need to establish an environment where their children are always around them or make sure that they are safely alone inside the home and not accessible by domestic staff or other neighbors, relatives etc. I feel this happens a lot in our society and I know of several people who have gone through similar or worse experiences.

My first "sexual" experience was around the age of 6-7,  where it was a game of "you show me yours and I'll show you mine" with a couple of kids from the neighborhood. They were a year or so younger to me so I felt in control but their servant came once and wanted us to take off our shorts and that felt wrong, so I told them not to do anything in front of the "dirty" servant. We would be sitting in a corner in the summer afternoon and just take down our shorts a couple of inches and feel as if we had done something really naughty and it was our secret, not to be told to any elder. These things always start as harmless "games" and then spiral into something much worse.

The first attempted abuse I encountered was at the hands of my own servant, who was in his mid teens while I must have been 7-8. He told me to come inside his servant quarter so that he could show me his things and once I was inside, he asked me to sit in his lap. He slowly took off my shorts and told me that we will play a special game which I will really enjoy. He then exposed himself and made me sit on his lap without trying anything, since I was getting a bit uncomfortable. I told him that this game was physically impossible, since he was too big to enter me but he said that it will be okay once he is inside. Luckily, he did not try to rape me or force himself too much and tried to enter me "gently", which obviously felt weird and I jumped off and told him I was not interested in this stupid game and ran off. 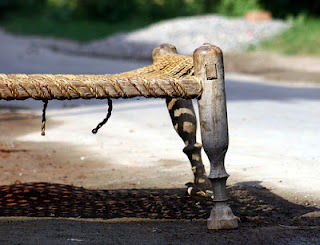 I don't remember the exact discussion that we had about keeping the game to ourselves but I did not feel the need to report him to my parents because he had stopped short of entering me. In my mind, he had done something wrong and crossed some line but since I had no physical pain or discomfort after the event, I did not feel as if I had been violated or that I needed to tell any elder in the family, specially since the servant was someone I used to play with on a daily basis.

A few years later when I was 12-13,  another servant who was just a couple of years older to me used to tell me his concepts of "sex-ed" and how babies are born and people have sex in their village etc. The takeaway of these sessions was that a man and a woman could have as much sex as they wanted and never have a baby as long as the woman peed after the act, because the "egg" was flushed out (I'm glad I didn't live my teens based on that assumption). We had also done a "you show me yours and I'll show you mine" a few times and used to lie down next to each other with our pants/shalwar off and just talk "adult stuff", without any physical contact.

He had gone for a long vacation and came back much healthier than before. When I asked him about it, he said that he had had sex with his cousin in the village and that had given him the "power". The logic was that if you let someone enter you, the magical energy and fluid would enter you and transfer the power to you and make you strong, while the person entering would lose power and become weak. He said that friends took turns doing it but he was doing me a favor by giving all his power to me and not asking for anything in return. I was a bit older and luckily saw through the bullshit and told him that I was not interested.

I also remembered the discomfort of my first experience and that was not something I was willing to repeat, even though this guy was my age and not so threatening. We ended up lying on top of each other and goofing off and he tried to force himself on me jokingly but I pushed him off and said that this was not on. I think the only thing that saved me was that he was roughly the same age and my "friend" and I could control the situation, otherwise it might have been worse. Had he raped me, I would definitely have told my parents at that age (or so I like to think in hindsight).

Another non-incident that I remember is the most slimy one in terms of childhood memories. I was playing in the lawn and the servant quarter had some guests of a Pathan servant of ours. They were talking in Pushto and just staring at me in a very slimy way, sort of stripping me with their eyes. They asked me to come inside the room and say hello but the vibe I got from them was really creepy. I just went back inside our home but I remember that incident as something that could definitely have ended up in some abuse, since they were outsiders and would not have been as scared as our servant in raping me. I must have been 7-8 years old at that time but the first incident had already occurred so I could relate with someone trying to enter me from the back. I guess once I grew up and got to know the prevalence of child abuse in the NWFP, I must have added some more "intent" to their gaze that day and understood why they were insisting on me coming in instead of them coming out to say hi.

I know my experiences are very minor compared to children who get raped or abused repeatedly but they just show the physical circumstances and situations that lead to larger patterns of abuse. I'm really lucky to escape without any physical or emotional harm and I have no psychological damage due to these incidents. In fact, they've just made me more careful about my own children and I'll hopefully be able to educate them to take better care of themselves in such situations.

My son is 4 so we haven't really discussed anything except for the fact that no one is supposed to touch his private parts or take his clothes off. We don't have a maid yet so it's mostly other female family members taking him to the toilet if both of us are busy.

We take care not to leave him alone with anyone and just stay alert ourselves, instead of scaring him too much. I think we'll be talking to him in a month or so when he starts school.

I think its great that you are teaching your son to be aware of inappropriate behaviour. I think every parent in Pakistan needs to have that talk with their kids.

And such experiences are never minor in my opinion. Yes, you are truly lucky that you escaped rape almost three times! How horrific is it that so many similar instances can occur in one person's life... always with a different abuser?  I'm sure its not uncommon in Pakistan - multiple cases of abuse, with multiple abusers...happening to the same person. A real-life nightmare.

Its very fortunate indeed, that you feel you weren't psychologically harmed by feeling violated...most people carry it with them forever. As in my case, it was just the brush of a hand and no more but it affects me till today.

On a more positive note however, we have had celebrities sign the petition, and people from the media show interest...we are also getting some interest from people in 'high places'. Let's hope it goes somewhere in terms of actually getting a Public Service Announcement on the air in Pakistan. (You can sign here) We still have a pathetic number of signatures considering the support we've received. I can only chalk it up to the fact that most of our people are lazy and indifferent about something that isn't affecting them directly.

We never know how to come together to make a difference, that much is obvious just by the state our country's in. We recently celebrated another year of 'independence', another year of letting pedophiles roam free....
Posted by Eiynah at 7:25 AM