*Straying away from the desi’s for a second*

This morning, my husband showed me a video on Youtube. With a name like ‘Sexin’ Islamic Girls’ of course I was intrigued….and I’m always in favour of tongue-in-cheek humour that comments on the cancer that is religious extremism.

But that definitely wasn’t the case when came to this song…sure, in the description they’re ridiculing Nigerian Jihadist terrorist group Boko Haram - which should be done time and time again. But my issue lies with the grouping of all muslims with such groups. Here's a sample from their lovely lyrics:

Everyday when the Boko Haram go off on various missions, the FOKN Bois keep their wiveses, sisters and daughters company

How offensive is it that they’re using the wives (or wiveses, as they say) sisters and daughters to hit ‘em where it hurts? The women related to these terrorist assholes probably don’t have much say in their activities. Objectifying them and portraying them in this manner is more than a little unjust – especially because they are a ‘Christian Rap Duo’. It’d be another thing if they were liberal muslims, making fun of the extremists stemming from their own culture… but they are quite far removed. And coming at them from a Christian perspective, just reeks of ‘otherness’. And FFS, nothing says 'a woman is property' like using the act of fucking her to get revenge about something.

For black people, it is often ok within their own community to use the ‘n’ word… for gay people its inoffensive (or at least less offensive) to use the ‘f’ word…. For Pakistani’s its ok if they use the term ‘Paki’ – those derogatory terms lose their negative connotations for the most part, when used within their own communities… taking back the ‘word’ and all that jazz.

Sure, some people disagree, but for me at least – the weight of the word depends on who says it. So;

a)They’re objectifying women to make fun of someone else

c)They are using words from the Qura’an which is offensive to a lot of moderate, non-extremist muslims that don’t go around harming people. But then again, muslims do need to learn how to be offended in a mature grown up way. So perhaps that is necessary for muslims to evolve, into a less rioty less 'lets KILL the blasphemers' kind of people.

Even the title rubbed me the wrong way (no pun intended). It seems so ‘othering’… as if ‘Islamic Girls’ are some kind of category very separate from ‘girls’.

Had they made fun of the terrorists directly, I might have enjoyed it…perhaps even laughed. But no… this video was not amusing.

I’d like to point out that I am very staunchly non-religious myself and still offended.

Admittedly, their images of women with their head covered devouring bananas, mirrors my own illustration from a couple of years ago. 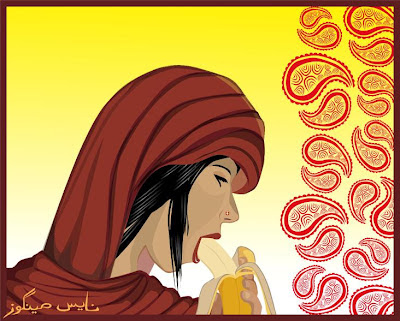 But again, it all boils down to whether you’re poking fun from the inside or if you’re attacking from the outside. Of course, human rights violations should be called out by everyone. But it always seems in poor taste to me when someone from outside the muslim community dedicates their life to 'fighting islam' or 'calling out islam' - its just awkward when it is someone's sole focus, from the outside. That's not to say it shouldn't be called out. It should....but if thats all you do, i'd wonder about the authenticity of your intent.

on a lighter note, i went and made Eiynah a Facebook account :) add me if you aren't too scandalized...
Posted by Eiynah at 11:17 AM