Bhai Chod: "Because why should only behens get fucked?"

So if you’re a desi on twitter, chances are you’ve probably already heard of Bhaichod :) An incredible woman, who is not afraid of speaking her mind and calling it like she sees it, check out more of her musings here. I’ve asked her to do a guest post on Nice Mangos….cummon…. with a name like Bhai Chod…. How could I not? *drum roll* :

What would you do if someone asked you this question?

Admittedly, a name like Bhaichod is a surefire way to attract the dregs of the internet, which in itself comprise of the dregs of a global society joined by magical cables and screens. Yeah, I'm talkin' to you

But how should 'one' react?

Why does someone wonder whether I wear undies or not? Is there some sort of taboo associated with underpants that I am not aware of? Are panties the new frontier for local mailas or maulvis or both? Is there a Panties Please Pehen-na (PPP) team operating that has sought to focus on my blog? Questions such as these have me awake and bathed in cold sweat in the middle of the night...questions for which I may never have an answer.

But of course, not every question is purely hilarious

The above makes you question what constitutes "normal" (if there is any such thing) in terms of sexuality. But the reason it sometimes doesn't feel funny is because you are the object which someone else's power is being forced upon.

You wonder whether it is the culture of repressing mention of sexuality - along with defecation and urination - in the public sphere that creates these desires by exoticizing them.

Are the dukaan uncles who blankly wrap sanitary pads in unmarked brown paper bags symptomatic of the brazen desires of men in our society? So deprived by the lack of knowledge about the wondrous contents of what sanitary pads might touch that their fantasies have gone into hyperdrive, manifesting as a need to sexualize any act a female performs. 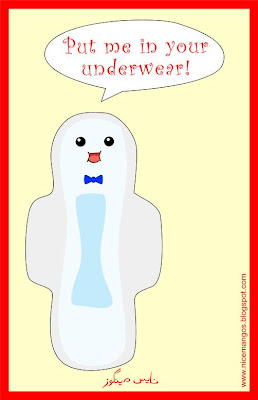 Every question sent to my blog is almost definitely written by a man.

(Aside from having a guest blogger, I've also asked the wonderful @Pathipen to be a guest artist for this post. This brilliant and fitting piece is entitled 'Girlstick'. I for one adore the creep factor here, and the girl factor, don't cringe boys, its ok... its a natural part of life. Do check out her blog!) 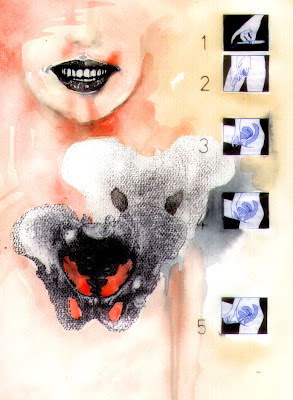 Men who are eager to explore the limits of their sexual selves - a fact that all women regardless of era, geography, culture and religion have been subject to as long as mothers have spoken to their daughters.

And in response to these unwarranted explorations, I can choose to mock them, or start pondering over it with some half-baked theory.

Let's explore these two roles a little deeper, shall we?

Being a woman who chooses to ridicule these conventions doesn't win you everyone's approval. Time and again, I am singled out for choosing a name like Bhaichod. The disapproval is not reserved for those who regularly use the desecration of female relatives as an acceptable colloquialism, nor does pointing out the hypocrisy of such behaviour find you any friends...well, unless you have the privilege to know the women I do on twitter :) *shout out to all you lovely ladies for being "you"*

So anyway, being funny is only half acceptable, which leaves being academic about such concerns. The advantage an academic argument has is that you can be taken seriously. In fact, the more you pepper your words with wikipedia-copy-pasted theories and drop the names of odd-sounding academics, the more respect you accrue.

But the further you dig up these references, the further you travel from the mainstream, the more you alienate most people and end up with a thin slice of the people pie.

What if I decide to get angry about this?

Unfortunately, our society reserves the same fate for angry women that it does for friend-zoned guys - once you cross over, there is no turning back.

An angry feminist, or feminazi - to use a more delightfully popular term - is one who doesn't pluck her eyebrows or shave her armpits simply to spite men (as if) and even if she does, she is one whose anger at men is obviously the cause of some deep-rooted and irrational hatred towards the Y-chromosome which is little more than a storm-in-a-teacup.

All these lazy and crude stereotypes have managed to achieve is drive said angry women further up the wall, to the point that they lose their own sense of femininity and are reduced to simply becoming anti-men, their only identity being defined by opposition to the Other, rather than any sense of self.

So how does one react?

The answer might lie not in a multiple choice approach, but a multiple layered one. A woman is not, and can not, be restricted to one pigeon-hole. Men might prefer their goals to be clear and their approaches to be linear, but women often find themselves occupying several roles and emotions at the same time, and even revel in such situations when possible.

But perhaps the biggest deterrent to this multiple-approach is that for all the feelings we may feel, we are given very little clue, or space, to articulate them.

If we return to the tumblr questions I was asked, we see that they are the products of men exercising their curiosity and crudity towards sexual matter. Much of this world is structured to allow an unashamed freedom for men to do so.

Male, and mainstream, humour is repeatedly sexual, but that's just ‘shits-and-giggles.’ Mainstream curses - in every language that I have heard of - are also primarily around the act of sex, and these are words that are almost inevitably regular when uttered by men, but can get risque or even rebellious when spoken by women, showcasing their relative exclusion from such spheres. Male achievements and ambitions are also often brazenly sexual, with everyone from idiots to intellectuals holding an orgasm as their purpose of existence.

Nature seems to give this advantage to men. When they have the first stirrings of sexual impulses, they manifest in a visibly erect appendage and a visually verifiable orgasm, which they spew in a sticky mess (yikes, doesn’t sound too enviable now does it!?)

Women on the other hand deal with the development of appendages that are visible to all. The girls who revel in the new found attention two sacks of fat endow them with, or those who hunch their backs in vain attempts to try and cover the sirens of sin that have suddenly sprouted on them.

And then they also have to deal with the trauma and wonder of mensuration, which immediately saddles responsibilities and disasters on a monthly basis. There are those who have to call home to ask for a new uniform-wali shalwar and a pair of panties while they try and come to grips with how much their life has suddenly changed, and those that sharply turn every time they get up a chair to see if there are any traffic-signal-red stains left behind.

And when we get to our desires - oh, our layered, murky, impossible to isolate desires. Desires which are caught between the dance of curses and stares, guitar solos and chocolate eyes, glimpses and grazes, shame and submission.

But of course, these advantages are not as natural as they seem.

Instead, because our culture and our selves privilege one set of expression over another, it is a given norm that male sexuality is obvious and undeniable. The journey towards sexual freedom has not done as much for the liberation of women as it has allowed for the proliferation of shockingly disgusting behaviour, such as the growing success of the Axe deodorant commercials.

But not all hope is lost amidst a nerdy man selling odor-repellent on the corpse of female dignity.

This very blog is testament to the possibility of having multiple approaches to these conversations. About the possibility of exploring these feelings in a sense that does not intimidate. But the only way to appreciate this space, instead of admiring it as only some socio-political gesture, is to embrace these ideas. To start seeing that the silence and shame and shock that we are forced to associate with sex are all superficial to what our truer emotions are. That they are facets which only display the most limited and limiting approaches. That exploring further doesn’t mean shedding these thoughts, but surpassing them.

We can’t keep pretending we don’t feel too. Nor do we need to. Embrace the female octopus...
Posted by Eiynah at 10:36 AM