...I mean I'm accepting interviews from both Indians AND Pakistanis.... what did u think I meant? Tut tut....I'm sure my husband's heart skipped a beat when he read the title - sorry honey, thats not happening :P

I've been hearing from some wonderful Indians...and lets face it, our cultures are so similar (especially Muslim Indians)... that I think its time to spread the mango branches a bit further. So from now on, whether you're Indian or Pakistani - if you're frustrated with the way your country deals with sexuality... and you're lookin' for an outlet...come pour your little desi heart out at Nice Mangos :) 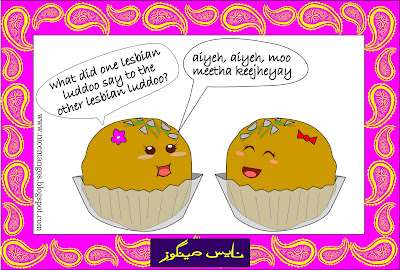 My next interviewee is a Muslim Indian, and since we've been talking about homosexuality lately, I thought this'd be a good time to introduce her. She's bi, bold, brave and honest. Gotta love a woman like that.

At what age (approximately) and how did you come to know about sexual intercourse?

Probably when I was about 12. After I had my first orgasm, I became very curious and started to read all the dodgy material in my uncle’s library. Intercourse entered the lexicon soon after.

Is Pakistan sexually repressed as a nation?

I can’t say. I know India is, but probably less than it was 20 years ago. But even now, while sexual titillation is common in movies and the like, virginity is still prized among most sections of society. You see a lot of prudishness as well, people willing to talk about things but never doing it.

Have you ever had/Do you enjoy having sex?

I love sex, in all its varied forms. Ever since I first got a taste of it as a teenager and overcame the guilt, I’ve embraced it.

I think premarital sex is fine. I can’t imagine marrying someone without being sure if there was sexual compatibility. I first had sex with a girl when I was 16, and with a guy at 18.

Whatever works for you. I doubt I’d ever have an arranged marriage. The friends I know who have are a mixed bag – some are sexually fulfilled, others are deeply frustrated.

Have you had more than one sexual partner in life?

Yes, I have. Certainly more than one.

Do you think sex is something that should be explored and experimented with or should one always stick with what they know?

I think sex should be explored with whatever boundaries work for each person. Personally, I don’t like piercings, but I’m very much open to sex toys, S&M (mild) and most other roleplay.

It depends so much on your partners. Some guys are just selfish and lose interest once they come. Others make sure they see you over the crest as well. But even in a lesbian relationship, you can have skewed equations, with one partner very dominant.

What do you think nature and the physical differences between men and women have to do with gender roles in society?

They do have a big role, but I’d look at upbringing too. Especially in the case of desi women, who are often over-protected or made to feel subservient.

Have you ever experienced a multiple orgasm?

Have you ever found or had your g-spot found?

Yes, I have. And having it rubbed and teased certainly works for me. I found it myself first and now try and make sure my partners can locate it too.

Do you know anyone who has sex but has not yet experienced an orgasm? What are your thoughts on that?

I know of several women, yes. In most cases, it has to do with severe inhibitions rooted in childhood, or partners who just can’t be bothered.

Do you think about sex everyday? How often?

I’d say I think about it several times a day.

Do you think sex plays a major role in your life?

Of course it does. Both thinking about it, and trying to do something about those thoughts.

Love it. Every woman should indulge, as often as they can. Best way to figure out your body.

Would you morally, ethically or in any way, have a problem with marrying someone who had had sex with someone before you?

Not at all. Experience is a virtue in my book. Better that than an inept beginner.

I’m a fan. I don’t watch too much of it, but I certainly am not one of the porn-haters.

To what extent, in comparison with the rest of the world, do you think people practice bestiality (sex with animals) in this country?

In India, especially in rural areas, I’d say it’s fairly common. Have also heard of a couple of people (girls) who tried things with their dogs.

As far as sex lives are concerned, do you ever wonder what other people in this country are doing and what do u think they are doing?

Judging by the population, people are having a lot of sex. Another matter whether they enjoy it freely.

What are your thoughts on homosexuality?

I’m bi myself, so I don’t think there’s anything wrong with it. It’s an individual choice. Whatever turns you on.

What are your thoughts on sex change operations and the people that feel they need one?

Again, it’s an individual choice. If someone feels they need that to feel better about themselves, why not?

I think Mahreen brings up an important point when she mentions that even in a lesbian relationship the power balance can be skewed. I've read enough biased ultrafeminist texts in gender classes (at Uni) that imply only homosexual relationships can achieve equality in the bedroom. I really don't think that's the case. In my opinion, sex isn't something that you can have absolute equality in - whether you're gay or straight. Its a kind of dance, the way I see it. Because of the dynamics and whats involved, one partner has to 'lead'...sure you can switch up the roles and keep balance that way, but to have complete equality during the act...I think its impossible...theres always someone doing the fucking, and someone getting fucked. And you don't have to take that statement literally...there are a lot of ways to interpret it ;)

Next time - more on what the other interviewees had to say about Homosexuality.

Oh and for those of you on Twitter who participated in my art giveaway contest, thank you! you're all awesome. Congrats to the two lovely ladies who won @Mahnoorie and @Bhaichod.... <3 I shall mail those prints out soon!