So, last time I was writing about the donkey honour killing (didn't think i'd ever use those three words together), and didn't get round to posting what my male interviewees had to say about bestiality. I'll get to that in a sec.. but before I do - I'd like to thank all the commenters; all your stories and opinions added more food for thought. And a subject such as this... you just can't wrap your head around it really... (unless ur a sick fuck and relate to animal fuckers)...so discussion is important.

As a nation, we really don't talk enough about this aspect of our lives... theres all kinds of awful sexual deviance...bestiality, pedophilia, incest, etc.... and the way we normally deal with the stuff thats hard to swallow is (no pun intended) to sweep it under a giant rug, so to speak, hoping that it'll just freakin' go away. But you know, it never does... in fact it manifests itself in other ugly forms...and perhaps shows itself in an even more disturbing manner. (excuse me for recycling a previous illustration of mine): 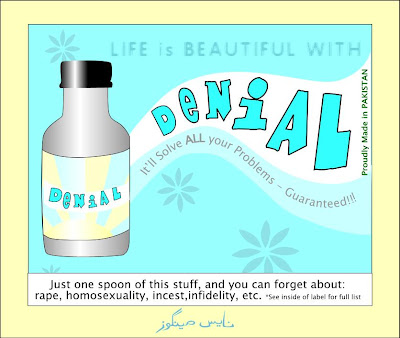 That's why i keep saying, we need to address these issues... and talk about them ... air it out, its toxic to keep it in.... and thats why maybe, so many in our country are so poisonous...there's no denying Pakistan's terribly sad state these days... i often wonder if when i have kids, i'd even take them there...anyhow, i digress. Thats too sad a thought to consider at the moment.

Where was I... ah yes, I was thanking the commenters.... all except one. No thanks to the anonymous person who described even the position their friend screwed a donkey in. I'm pretty sure i know who this commenter is, and once again - he completely misses the point of the post... *le sigh*...

For a while now, I've had an odd sort of fellow leave random disturbing comments, sometimes as anonymous, and once in a while he initials his comments. 'N.J.'...I've gotten to know his 'writing style' and the kinds of comments he leaves are usually different from the others who are simply trying to have a discussion. 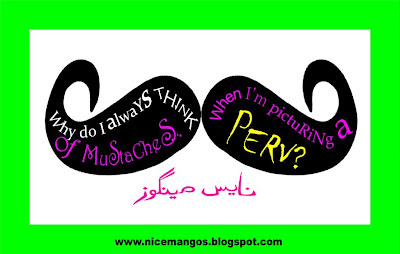 NJ seems to get off on writing sexual details. Rather than tell him to eff off, i've often tried to make him understand the reasons for my post....i've tried to get to know him a bit better rather than ignore him, simply cuz he's an intriguing character...one that represents the 'average' pakistani male a tad more accurately than all you snooty ejumacated, westernized types of desi boys that usually read the blog.

In case ur curious, here are some of the comments he's left, or at least I assume its him:

when i posted that i was on vacation:

May 31, 2011 1:45 AM
Eiynah said...
Im sure more than the girls, you'd like to see it NJ, and thats really not what this blog is about... there are plenty of sites for you to go see women and vibrators, but Nice mangos is more about creating dialogue...

Eiynah said...
.....why must everyone comment as anonymous on this blog... make up a fake name or something... it'll only make things more interesting. Its getting a bit dull responding to anons all the time. Just pick the name/url option... and make something up... please :)

Anonymous said...
Your Hadith link regarding musterbation reminds me of Qari M***** ul Haq Saheb and our Islamyat teacher Q*** sahb.
He use to like all good looking young boys only. When a boy sit beside him for daily dars he use to put his one hand in shilwar and stroke making sounds like a pigeon taking off for a flight LoL. He also had a fetish of pinching & pressing our heals with his thumb and forefinger. Those days we can't understand all this.
The Islamyat teacher use to put some peanuts in his shirwani pocket and tell (good looking boys only) to take some peanuts from his pocket and there you can touch feel find something warm & stiff poking into his side pocket.

February 14, 2011 12:01 AM
Anonymous said...
Lady your blogs great reading stuff for curious men like me..
Aaaaah Bachpan.... relative ki shadi per raat ko Zarina aunty ke sath aik he bed per sleeping aur slowly pulling her shilwar down from behind and inserting willy in her butt crack (heavy heartbeats) and cuming quickly then pulling up her shilwar to its place.
Funny thing in the morning having b/fast together Ammi Razia aunty me and others... Razia aunty teasing me pinching my cheek and saying oooh T.... sahb bhi is shadi mein aye hain... Wah

So although I had to endure a few pervy comments here and there...I managed to get an interview with this NJ, of course he was more than willing... and even mentioned in the interview form that he was getting hard while filling it out :/

Now thats a mighty interesting read... we'll get to it after the other male interviewees thoughts on bestiality...it'll be worth the wait, trust me;

I definitely have a pretty strong opinion on this. Its completely wrong. More than the gross factor of doing it with an animal, the act is basically rape. Majority of the animals in this world have sex to reproduce and not necessary for pleasure. For us humans to have sex with them for pleasure is completely wrong and disgusting. I take myself as a progressive, liberal, and forward thinking person and there's not much that bothers me, but bestiality is something I cannot agree with.

I’ve heard stories but just one or two, not many. I do think it exists more in countries that are sexually repressed. We are sexually repressed as a nation - I think our culture and our orthodox religious beliefs contribute to this. Many people misconceive religion to be some kind of sick game that god is playing with them, and in my opinion its not like that – and because of this misconception there is a lot of sexual repression in our society

*ugh* “I don’t know about this country, but I was in Florida for a while and I heard that sheep were very popular there. I have never heard stories over here, but judging by the rate of the population I’m sure people are doing it.”

I have no clue…I’ve never even heard stories about it.

its a lot more in pakistan compared to other contries....