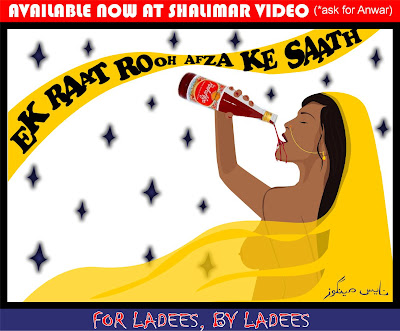 “Ok, so I’m starting your ‘research’ now…just letting you know incase u turn around and wonder what I’m watching on my computer…”

So while I’m watching the clip my husband’s tinkering with something in the kitchen and says in a kinda complain-y tone,

That’s when I saw a wave of realization cross over his face, it hadn’t even crossed his mind, I suppose… its just so normalized…so taken for granted. When the roles are reversed, it hits you....He goes,

See, it’s not that he’s not sensitive to women and their issues, its just that when you see something over and over again, in all aspects of society, you do tend to become desensitized to the issue. I mean, something as basic as TV / print advertising – objectifies women almost all of the time. And advertising is something we’re inundated by… from the moment we wake up, to the moment we get into bed…it’s something you can’t escape. In a way, it’s a soft core model for what’s portrayed in a lot of porn, gender roles aren’t as exaggerated anywhere else… That’s why a good male objectifying ad is needed from time to time… esp when its done well…

Who can ever forget the old spice guy;

And not to mention this little treat, I always enjoy this one ;)

Ah capitalism, you can sell anything, especially when u define it as a ‘niche market’ I suppose.

Here’s what the interviewees had to say on the topic;

If it’s done well it can be very sexy, but not the hard core stuff it just makes sex look filthy, unromantic and disgusting and if I saw it before I did it I would’ve been a lot more reluctant. But the soft sweet romantic stuff is a good mood setter.

personally I’m not into watching other people having sex.... I also think mainstream pornography is really degrading to women... it’s always multiple women with one man. so I don’t like to watch it. . I’m positive there’s pornography in Pakistan....didn’t someone tell me they sell it at rainbow market..... I don’t know if I wanna see that... hairy Pakistani men... (laughs) they probably have names like leela ka ghar.... hahah leela ka bistar.... hahahahahh

There is a very interesting article on pornography that talks about how, when two people are making love, they are not actually having sex with their partner, but rather an image that they have constructed throughout their lives. I am expressing it badly – all I remember is it was written by a philosopher and I think it was in the NYT

So, nothing outrageous or shocking in those thoughts…a couple of women mention the ‘male-centric’ aspect of it. The one person that stands out to me though is Sumeira, when she says,

It leaves me thinking… what?! a) how can you as a woman not see that at least on some level, it exploits females… and b) how do you not see that its more male-oriented? How?

I don’t even know how to explain to myself, what she could possibly be thinking….but if you’ve been following the interviews, you may have noticed that she often makes a lot of bold statements.. and also, has had a bit of a troubled past….. perhaps her past shapes her perception. She’s said things like,

I got married out of spite. My mom didn’t want me to do it…I did it. Had a few drinks, came back told her I was married. Handed her the nikah namah…You can’t tell a kid ‘you’re daddy’s not nice’

my mom was pregnant with me she overdosed on pills because she caught my father fucking around. My father has actually admitted to this himself.

I actually saw my mom having sex, she didn’t show it to me on purpose. But she knew that we knew that she was doing it- she knew we were in the house – you shouldn’t be doing it when you’ve got 2 kids in the house. The kids can fucking hear you, they’re curious …they’re going to look through the keyhole.

*shrug* I dunno what makes people say the things they say…. But one can speculate… the important thing is, that at least they say them….