Our Sexual Identities come in all Shapes & Sizes - Oh - and being a rapist isn't part of the spectrum. 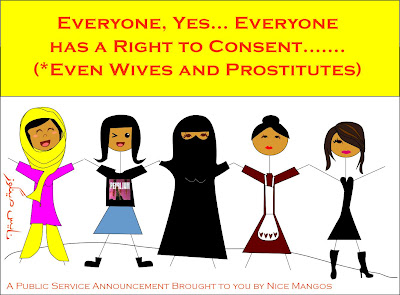 So a lot of interesting things've been happening lately... I've been getting several emails and even a new interview volunteer. However, some of the stories being brought to my attention are horrific. And I'm so sad to hear this stuff goes on in the motherland. (Sad but not surprised)

Im glad that people feel comfortable talking to me about it... but again, much of it is behind the scenes... Obviously, i can't discuss any of it, but I do urge you to share... anonymously even. It'll help others in the same situation as you.. and maybe, just maybe you can provide comfort for someone else. Knowing you're not alone is a starting point for sure.

We've already talked about how a lot of people in Pakistan are sadly misinformed about sex and consent. Men and women alike. I'll say it again, prostitutes can be raped. Sex without consent with any human being is rape. Doesn't matter what they do for a living. Another common misconception is that you can't rape your wife - since its part of a wife's duty to be available to her spouse, whenever, wherever. Obviously, that isn't the case. Most of you reading this post are civilized creatures I assume :) , but its only an assumption. The sad fact is there are wives being raped all over the country and not just amongst the poor and illiterate either. An even more painful truth is, the women just assume thats how sex is....And if they try to bring it up with other women, they're politely told to shut the fuck up and to be a more cooperative spouse.

Again, before you send me a pissed off email or leave me a stinker of a comment (which i always love btw...seriously, so do feel free to argue the point) I'm just going to say : I DO NOT mean to imply that all men in Pakistan are like this... all I'm saying is there are more than you might think. And it could be someone super refined, educated...someone you'd never suspect. But fuck.. how do we combat that problem? we can't exactly go policing things in other people's bedrooms.... but we can make sure that us and the people around us are aware and educated about sex. Discussion is a great way. So talk about sex with your friends, often :P Some of the views that come up might surprise you. And of course if you know anyone in an abusive relationship.... help them to recognize that...and speak up.

Most importantly... when you fuck... make sure you fuck well :) If you're a better lover, you're making the world a better place... you're contributing to equality, education and less abuse...

I wanted to give a shout out to one of the commenters from the last post, Black Mamaba...Wasssuup! :) I found your comment really interesting. (Since you had India as part of your name, im going to assume you're a fellow brownie :) ) Now from what I gather, you're a Male Identified Lesbian, n'est ce pas? Also known as a Guydyke.
And jeez if you're in India that must be tough. 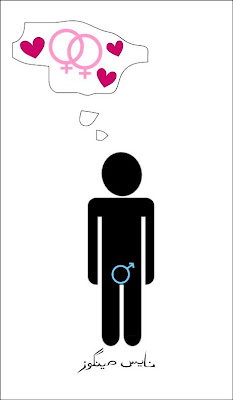 Many of us in the subcontinent are still coming to terms with general sexuality let alone alternative sexuality....Although India's really moved along, but till the late 90's i think, we didnt even see kissing in bollywood movies. Trying to be understood as a Guydyke in a fairly conservative society must be next to impossible. For those of you still scratching your heads...let me try to explain...a male identified lesbian is a guy... who identifies as a lesbian. Usually (not always) attracted to other lesbians or just butch women. Being gay or even straight is hard enough in our society... but being something other...i can't even imagine how you'd find a like minded individual... or manage to get laid.

Im sure some guys are rolling their eyes thinking, "pfft Im a lesbian too... i love lesbians and watching women get it on" but thats really not what its about. Many times being a Guydyke can be very sexually frustrating, I imagine (and please anyone that can shed more light on the topic, feel free to do so), If you're a guy - you're almost never going to be fully accepted as a fellow dyke...and as much as you'd love to indulge in and fit in to lesbian culture, you may always be considered an outsider. Another issue that you could come across is if u truly feel like a lesbian, and you fall for one.... you will most certainly not have those feelings reciprocated.

My husband and I have an acquaintance who identifies as a 'girlfag' she wants to be referred to as a 'he',  is married to a cis man AND lives 'his' life presenting a traditional female. A lot of make up,  dresses, etc..... at first i found this totally confusing... and a little unnecessary...i still often call her 'she', its gonna take some getting used to. I don't mean to offend, but she chooses to present as a female and is in a traditional hetero marriage. I forget (s)he wants to be identified as he.

In my eyes its definitely an alternative alternative sexual preference.... and im sure it could leave you feeling pretty isolated.... from both straight and gay communities. I'm glad the comment came in and gave me a chance to talk about it. Im sure its not a super common thing in Pakistan, but im pretty sure that it still exists. Our sexual identities come in all shapes and sizes... and sometimes shift or evolve. Being more aware of all thats out there will only help us be more in touch with ourselves.

Speaking of being more 'in touch' with yourself....guess i'll be posting about next...
Posted by Eiynah at 11:23 AM