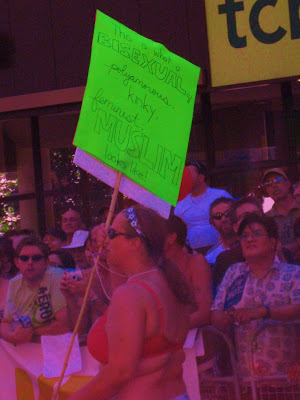 (clearly, the title doesn't refer to the girl in the picture)


It is scorching hot outside, I feel like I'm in Karachi (its supposed to feel like 40 fucking degrees today, the city has issued a heat alert)~

And over the weekend, standing in the sun for half the day to watch the pride parade was too ambitious I think, I had to take a break and cool off for a bit. I'm still feeling the effects. I must be gettin' old.

Sadly, I didnt see any Pakistani flags this year :/ I saw one or two brown people amongst the rainbows, balloons, whistles and banners (not nearly enough though). A couple of people with signs sporting the word 'Muslim' on it, even a Hijabi or two!! Hijabis in unexpected situations always have my attention.....always...! :) Go Liberal Hijabis!

When the parade ended, the crowd dispersed before you could say the word 'Fabulicious' and there was not a single thong left in sight... Then I saw it, my photo opportunity of the day....Right there standing in front of me, amongst scattered condom packets and popped balloons, was a woman with her baby. I saw lots of those that day.... but this one was special. Shalwar Kameez'd from head to toe, I hope she enjoyed the parade :) The babys even wearing beads! 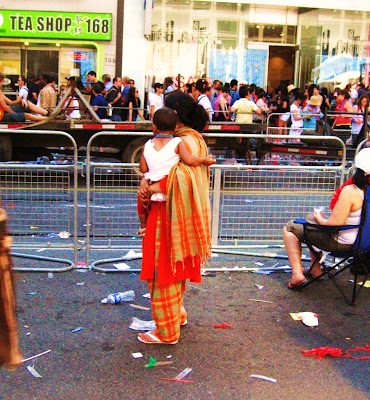 Anyway, after all the nudity I saw over the weekend, the continued discussion about Pakistani repression shouldn't hurt as much;

I had to call in some outside help for this part.

In order to understand how others see us, I thought it'd be a good idea to ask them.

However, like some of the Pakistanis that refused to speak to me, many non ones did too. But thankfully, I have friends from all over the world, with different backgrounds and religious beliefs. Technology seemed to be on my side that day (we do have an ongoing battle), as I contacted them and received their answers without any hassle from facebook or email!

Some* of their names have been changed to maintain their privacy. But some felt like they had nothing to hide. Here’s what they say:

I think that in terms of sex between men and women Pakistan is repressed… but only for those who are very religious. I’ve always thought that super religious people have sex for procreation and not pleasure - at least women. I’m sure men get a chance to have sex for pleasure.

I’ve also read somewhere that in the Middle East women are not allowed to cheat but men are. I think that sexual repression here is very one sided. Where women are repressed and men are not. But then again I think most women that grow up in those circumstances don’t know any better and accept whatever comes to them. Of course not all, there are always the rebellious types.

I don’t really know what being gay is like in Pakistan. I would guess that it's unacceptable and not as out in open as it is here (Toronto)...Probably because of higher religious beliefs and harsher punishment.

But I also always found it fascinating that girls who wear the whole-body-covering-dress (sorry don’t know what’s it called) wear it not only because its a religious thing but also because it makes guys like them for who they are and not for their "assets". Which kind of creates a less shallow society, then what we have here.

(Background: I'm a hodgepodge, a real mongrel.
My father's side is from Poland. They arrived (in Canada) in '47 I think. My mother's side has been here since about 1500. I think they're English - there is some Scottish as well. "Generic white boy" will do.)

In all honesty, I do not equate Pakistan with sexual repression. Not that I know very much about Pakistan, but the image that comes to my minds eye are attractive women in colourful veils. Stereotyping possibly, but it is the association I have, and it is certainly not repressed.

Oddly enough I do not associate sexual repression with any Muslim country. What we have in places like Saudi Arabia or places ruled by the Taliban are forms of extreme misogyny, which I think is different. Repression is possibly involved, but I think it has more to do with hatred of women than hatred of sex. I do not see much of it in Pakistan. At least not officially - there are extremist groups, as there are anywhere. This is a country after all that once had a woman as Prime Minister (unlike certain other places).

Repression to my mind, pops up more readily in fundamentalist Christian circles and certain Ultra-Orthodox Jewish sects. Groups which view sex as the root of all evil, to the exclusion of all others, to the point of an obsessiveness with sexual matters that borders on the perverse.

I think the Pakistani culture does repress sexuality (at least publicly), if it's anything like the Indian culture that neighbors it.

Generally, I think that Asian countries (my husband claims he's Asian because India is geographically in Asia) are more private about sexual issues. It's a cultural thing that goes back I don't know how long. And so, I realize it's an over-generalization, but on the whole, I believe Asian cultures (that includes India and Pakistan according to David) are more reserved about flaunting their sexuality. Just look at the movies that come from that part of the world. Kissing on the lips isn't even allowed. And remember the big deal they made over Richard Gere kissing that famous Indian actress in public? That kind of stuff I guess is what contributes to my thinking.

I think Pakistan is a little more repressed than other Muslim countries, namely because religion is part of their identity, i.e. Pakistan was formed partly due to religion, and any religion represses any kind of "deviant" sexual acts. Pakistan seems to be getting a little freer with sexuality but its not clear whether they are becoming more accepting at the same rate that the world is finding acceptable in terms of sexuality.

Well I don't think it’s a yes or no question considering the fact that I find my country (Turkey) and yours very similar on the sexual repression issue. I believe, it looks like a repressed country and partially it might be… for example, in small villages and places like that.

However, the issue is so different for large cities in my opinion. I believe in big cities in these countries people prefer to pretend that they are not sexually active or even be open about that topic - just to be safe. But in their own group of friends or community, everyone is very relaxed and open-minded. I’m not sure if I answered your question right but what I was trying to say is: maybe it was sexually repressed and maybe it still looks sexually repressed… however in reality, I doubt it is.

I would think that Pakistan is a sexually repressed nation. I don't know too much about Islam, but I know that women have to cover themselves and wear a hijab. My impression is that sex is not really talked about over there, nor is it used for advertisements, etc. I know that there are a lot of attractive Bollywood actresses in India, but I don't see that kind of thing coming out of Pakistan. I think it is because of the religion. It’s the same kind of things in the United States. You expect that the religious people aren’t really into sex and sexual activity, and keep the whole thing under wraps.

I also think that sex education is not taught very well if at all and this causes a lot of problems like high HIV infection rates and unwanted pregnancies.

With media being my major source of info, I think I should point out certain news stories that stick out in my mind. One report stated that some studies estimate as much as 75% of female children are sexually abused in the subcontinent of India.

(Background: I'm 1/2 first generation Canadian. My dad is from Germany originally, but my mom is like 3rd or 4th gen. Canadian.)

To be honest, I don't really know. I've never been there, and I doubt my limited experience with people who are from Pakistan would actually be indicative of how people generally are in Pakistan. A lot of images come through the media, and through conversation with people, about how women are treated in Islam, including in stricter countries being legally and culturally forced to wear veils, but then this doesn't necessarily mean that behind closed doors there would be this sort of hiddenness. It does suggest that almost symbolically there is a gap in communication about topics of a private nature, though, and how else can knowledge and understanding be built about enriching sex lives, safety, etc.
I was speaking with a friend of mine, a white Muslim who's focus academically was Arabic countries, and as we were talking about Al Jazeera, he told me that it has encouraged their people to open up communication, and that now there is also a women's talk show which has speakers from different contexts discussing topics like masturbation, and other risqué subjects. I found this to be a bit surprising because from my previous understanding of the Middle East and the climate there, I would assume this to anger and frustrate men (for whatever reason there is such a climate of repressing female power), and because even in Western cultures something like this is taboo. You'll see ‘Sex with Sue’ on television, but the idea of having masturbation as a topic on ‘The View’ would be obscene, for both men and women. In fact, I wonder if you could ever convince Ann Coulter and Oprah or other women from diverse backgrounds to come onto a talk show and discuss these types of issues. Maybe, then, that TV show in the Middle East is proof that in some ways they are a bit less sexually repressed than we are (or maybe some people are willing to be more radical and resist complacency).

So, ethnic backgrounds aside, most of my friends are just plain Canadian. I live in Toronto – so it was bound to happen. I would have loved to fly around the world and ask all types of people. But, like I said before, most shy away from such controversy and secondly, I don’t have the funds to fly around the world. So, I’m sitting here in my apartment, trying to make do with the limited information I have. Outside the window I can see the first snowfall* of the year, and my mind drifts to a land far, far away…a land of exotic spices and rich fabrics, snake charmers and erotic brown almond shaped eyes, a land of emergency rule and illicit abortions…a place where cheating husbands and disappointed, helpless wives co-exist in silence……I wonder, is this the picture that non-Pakistanis see? :(

*Its snowing then because I wrote that a while ago.
Posted by Eiynah at 11:10 AM