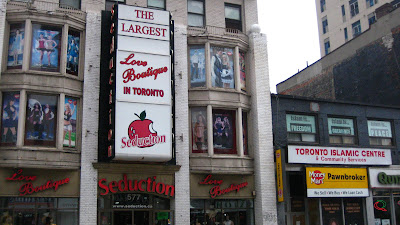 So this is the store I was standing outside yesterday. When I got home, I wished so badly that I had my camera with me, I made sure to go back today and take a pic. Sadly, there were no interesting pardoxical sex-store-going niqabis there.

There's another interesting detail in this picture, don't you think? Apparently the Toronto Islamic Centre is right next door!! I only noticed that very recently...but, this is what I mean when I say I love the diversity Toronto has to offer. I absolutely love that they manage to co-exist, side by side, that's what humanity should be about - not hating on each other. I don't think Seduction has a problem with who moves in next door, but I'm more surprised at the Islamic facility, I'm relieved to find out they haven't made a big deal about it. If Islamic centres can get to this level of tolerance around the world we'd be far better off as a community. Sex stores are fine coexisting...its those who oppose everything to do with sex that are a problem. Kudos to this Islamic centre though....for at least this one thing. How I'd love to be a fly on the wall to hear what people coming and going have to say about the sex store next door.

Although, one of the three signs in the Islamic window is especially unsettling (while the other two are just plain inaccurate)...I was never quite able to digest the idea of 'obedience' in this context. Mind you, Seduction sells some tools and paraphernalia for 'obedience' as well ;)

Let me get back to my main point, I have a tendency to digress, So as I mentioned before, this project started out as a book - I wrote the text below a couple of years ago, so bear with me;

There are many misconceptions that surround Pakistanis/*all* Muslims in the post-9/11 world… It was a tragedy that changed everyone’s lives forever. The world suffered a great loss in many ways – and one thing Muslims haven’t been able to recover is their reputation. Pakistanis in general, have been accused of being terrorists and fundamentalists. Some Pakistanis obviously are, but most aren't - it's time the world saw another side... it's time we brought out another side. Because let's face it... Pakistani's are only heard about because of something religion related by the world at large. This is not really the fault of the rest of the world.... it's on our shoulders to dismantle the stronghold religion has over us. To let our people flourish and discuss other aspects of life too. We need to get to a point where Islam can coexist with aspects of modernity, humanity that are separate from religion. Sex, love, kink, fun, freedom...the islamic centre pictured above is an inspiration of sorts because of it's peaceful coexistence with something that stands for the opposite.

I begin this blog with a desire to nudge gently towards this place...of peaceful co-existence. You don't have to like what things stand for, you don't have to agree... but the day Muslims as a group can defend everyone's right to exist, is the day Islam has caught up to the rest of the world.