Keep that Sausage in your Pants till we Find you an Appropriate Bun! 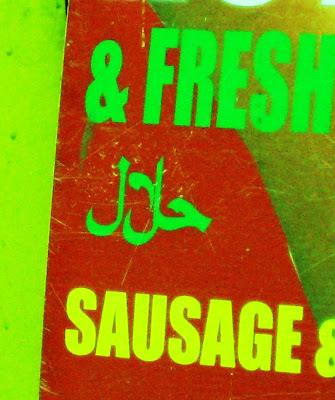 I've been on hiatus for the past little while... with all the crazy stuff going on in Toronto I just didn't find myself with much time to write. Firstly, we had G20 Riots, with detainees and burning police cars! And lets not forget, our precious few summer months are always jam packed with activities (the resulting mosquito bites have kept my fingers far too occupied to type). What I'm looking forward to most is the upcoming pride parade :D ! So much fun......I'm hoping to get a shot of the Pakistani flag in the parade - I've seen it before.

Oh - and on one of my recent adventures, I was inspired to take this picture (perhaps influenced by pride week)...i came across this hot dog vendor on the street, and though I commend him for making sure Muslims can enjoy street meat too - by selling Halal sausage...It did make me chuckle a little. Sounds like an oxymoron on a couple of levels. Maaaaybe I'm just immature :P Happy Pride!

Maybe pre-'shaadi' lovin' (shaadi = wedding) just isn’t as big a deal to anyone as I thought it was. And since my kind interviewees are provided with a status of anonymity combined with a public vehicle of expression… could it be, that we are finally getting to see this topic in a different light? Naaah. There's no way that most people are this cool with it. Not in the mother-land. Nuh-uh.

Isn't this the place where guys wanna have a good time, but marry a virgin?

I knew a few people in Karachi who looked down on me for my liberal opinions of sexuality. They themselves engaged in premarital oral sex, but considered themselves to be ‘virgins’ because they had not engaged in ‘penis-penetrates-vagina’ sex specifically. Now, seriously – if you believe that ‘god’ wants you to be a virgin before you’re married, you can’t outsmart him by having other kinds of sex…! In a nutshell: they thought I was a sexual deviant (even though I was married), because I believed that people have a right to have sex when they think its right, not when society tells them its ok. So, I was bad for thinking such thoughts, and they were good because they were outsmarting their god!

Generally in the country, there is disorder, there is turmoil and amongst all of that – I’m sure there’s sex. And so, continuing the theme - within the realm of Pakistani sexuality… there is disorder, turmoil, chaos and confusion. Some of us don't know what being a virgin involves, some may think oral sex, simply isn't sex...

If you are willing to take a quick look back at the last post, all this is summed up in Layla’s opinions. I think she's the perfect example of what an average (middle/upper class) Pakistani’s thoughts on the topic would be. A Pakistani that’s inundated by Western media, someone who’s exposed to extremist views and is either directly or indirectly affected by the violence that follows. This is the problem of a country that’s losing it's grip on it’s identity We are no longer Indian nor are we ruled by the British. We are not a nation of extremists and we don’t want to succumb to the overwhelming, all-consuming power of a Western belief system. We don’t know who we are. You can't really blame Layla for having mixed opinions, given the circumstances...

Moving along though, here's what the guys had to say:

I have had pre-marital sex, and I won’t hesitate to say so – however I haven’t had sex with more than one person in my life. I thoroughly enjoy having sex and I think it’s quite important to make that clear. There is nothing wrong with premarital sex I don’t feel guilty about doing it myself (even though my parents would kill me if they knew).

I think it would be best if you do end up marrying that person also, but if you don’t it’s not a problem. I myself wouldn’t have any issues marrying someone who has had sex with another person before me.

Premarital sex ….I think it’s alright if true love is involved, then marriage is just a formality that one must go through. But the true thing you must consider before having sex is if you’re really in love with the person or not. Then marriage has no role. I don’t agree with casual sex at all, I believe sex is a very spiritual thing. – It’s almost a godly act…or an act of worship almost. I myself have not had sex yet, maybe my opinions will change after I’ve experienced it myself – who knows…

After admitting reluctantly to the fact that he had had premarital sex he continued:

I think that you better damn be sure that you will be spending the rest of your life with this person if you choose to have premarital sex with someone. I’m not spending the rest of my life with the person I had premarital sex with…I’m not too happy about that, I don’t feel guilty or regret it, but I feel like it shouldn’t have happened because now when I do get married to someone or the next person that comes along she’ll have this thing like -oh you were with her- I can’t say that she didn’t mean anything to me because she did, I can’t say it was in my past because your past always stays with you – you know…I can’t make excuses for it, I cant get away from it, it will stay with me for the rest of my life and I don’t think its fair for the person that I’m going to be with to live with that.

I’m not opposed to marrying someone who has had sex before but I will have a very hard time agreeing with it and I wouldn’t blame her for telling me I’m an asshole because I had sex with someone before her as well. We would always fight about it; I know that…it would come up in the littlest things. I was young when I had sex, but you know I still think the same way so maybe I wasn’t that young.”

I enjoy sex but I feel scared because of pregnancy issues. I haven’t always used protection – and it’s not about being in the moment… it’s just better. I’ve only been with one person and I took their word for the fact that they hadn’t been elsewhere but I was scared of pregnancy every time. I wasn’t always prepared in the sense that I didn’t carry a condom around in my wallet all the time, sometimes I wasn’t going to drive a quarter of a mile just to go get it – but there were times when I did.

(Laughs) Of course I enjoy having sex. Of course I do.
Premarital sex… I think it’s a personal choice – it doesn’t change you as a person essentially – that is what’s usually questioned. I don’t think it should be as big a taboo as it is. I’ve engaged in premarital sex…more than once…no regrets. That’s just a guy thing I guess (laughs).
I wouldn’t have a problem in any way marrying someone who had sex with someone else before me.

Now, I don’t see it as anything big... but yes there certainly was a point where I was very against it. To me it's a very emotional way of expressing yourself... I’m not saying go out and have premarital sex with every Tom, Dick and Harry.... But I don’t see it as being a taboo anymore. Yeah, it’s ok.

When I was against it... for me at that point... I don’t know if it was so much religion or because I’m the elder of a few siblings... and I was supposed to be setting an example... I guess it would be a combination of both of those scenarios ... I couldn’t really be ‘pro’ it because I was meant to be setting an example.... I couldn’t be pro premarital sex and want a wife who's a virgin... that’s what I want-ed... Now, I could care less. I changed as a person ... as a whole.... I changed my views on pretty much everything... I put myself in the role of being ‘me’ ... rather than someone who is setting an example for siblings... I’m going to live my life the way I want to live my life. As a result I changed as a person.

But, me personally, honestly, I’m for the lack of a better word... I’m asexual... for me it’s more about everything else. ... but I’m more interested in ... everything else.... the whole lead up to it... as opposed to the actual intercourse part of the thing… I’m not a little angel (laughs) ... honestly; I think I’m just too conscious about my body... that’s why... for me… physically having to get naked with someone else is like a BIIIG DEAL.

Premarital sex is not good… obviously I’ve had sex before marriage but I was young ...I believe it’s good to have one partner.... it protects you from diseases....

No...I’m 100% sure I wouldn’t have a problem marrying someone who’s not a virgin...because who knows what kind of circumstances people have sex in when they’re young. Maybe it isn’t his or her fault... if she wants to become a good person by marrying you ...you should overlook it....

Well, who would have known that the men don’t have half as much to say as the women do. :P

After reading their opinions on the matter you get a sense that though they claim they wouldn’t have a problem marrying someone who had had sex before marriage (which i thought was pretty cool)…they tend to display a preference for situations where there is only one sexual partner in life.
Posted by Eiynah at 12:05 PM