Hijabis in a Sex Store? Wha-aa! 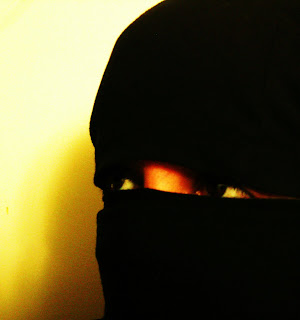 So, todays as good a day as any to make a start with the writing....

Welcome to 'Nice Mangos' - It doesn't take long to figure out that this blog is going to deal with two things in particular, things you wont often find paired together. It's a pairing that borders on the bizarre and unthinkable actually, at least that's how I've been raised to think about it. Pakistanis and sexuality... *gasp* Yep, there you have it, we do do it, you know. It's time to acknowledge the fact.

Something interesting inspired me to write today. I was out walking through the bustling streets of downtown Toronto, enjoying the diversity that this city has to offer. I passed by this gigantic sex store, which isn't something that would normally make me stop and stare, but the curious thing about it was this pair of hijabis, nay, nakabis - fully burqa-clad from head to toe. Their faces were covered and they were also wearing black gloves for extra measure. Really, all you could see was a very narrow slit where their eyes should be. I guess their eyes were there....I just couldn't see them. They had a baby in a stroller and were going into this multi-storey sex store...I had to stop, and so did this other woman.... we both couldn't help gawking. Rather impolite of us. But it was a contrast you couldn't ignore, the other woman and I eventually turned to face each other, jaws dropped, and broke out into laughter. I'll tell you what I said to her, "This is why you gotta love Toronto." I left it at that.

Now there's no way of me knowing that they were Pakistani, but I will assume they were Muslim. Good for them, they recognized they wanted more from their sex life and went after it. Rather than shying away. Or, even if they were simply just curious about what goes on in such a store, at least they were brave enough to go in. Perhaps I'm reading too much into it, maybe they assumed it was just a lingerie store *shrug* ...

Anyhoooo, nuff rambling about random Muslims' activities...let me get more specific about the blog. So, this project was started several years ago. I originally intended it to be a book, but to my surprise (I wasn't that surprised) no one wanted to get involved with a messy topic such as this *sigh* I've actually toned it down a bit too - I wanted to call it....hear me out now, before you get all pissed off, ok?

So yah, I wanted to call it 'F*cking Pakistanis' - wait, wait..... I'm not trying to insult or offend anyone. I just wanted a catchy name that would stick in your head, ya know? And, I mean, I am writing about Pakistanis....f*cking.... it's just a straight forward title about Pakistanis that 'get it on', which I imagine is a lot of people in our over-populated country... meh.... but after much thought... I decided not to call the blog that - especially in light of the whole facebook-banning. They may still ban this anyway, but I'll continue writing. Somehow, I'm hoping my words will fall upon the right ears (computer screens). I'm not just trying to talk about something controversial for the sake of being controversial. We need to recognize how important it is to be educated about sex.