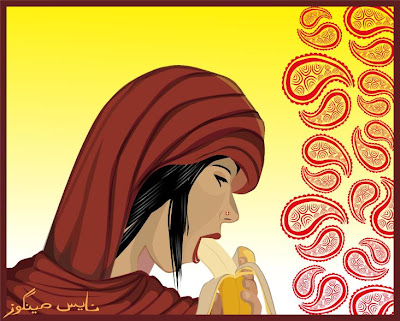 Before we get to the interviews, here's a bit more from what I wrote a couple of years ago:

I remember when at the age of six I first heard about the concept of sexual intercourse – my initial thought was, “Muslims can’t possibly engage in such an act!” Why, that would go against everything I had been taught about our ‘pure’ religion. I couldn’t even begin to grasp how everyone I knew that had children, had actually done this! My parents … my grandparents… and the more offspring they had ... the more times they had done it. My tiny little brain went through a mental list of everyone I knew, loved and respected – I counted the amount of children they had... or didn’t have… and was in complete shock!! The more conservative and religious ones seemed to have done ‘it’ more than anyone else, since that group collectively had more children. Especially the grandparents… yuk!! My mind couldn’t handle the thought of the world being such a place.

(Soon enough I got over the shock … came to accept it … discovered more about it… and still continue to be curious - quite the turnaround, eh?)

We all know that it’s an incredibly frowned upon subject in any Islamic nation and with the growing irrational fundamentalism in Pakistan the ‘radius’ of such taboos is only increasing to engulf more and more of the country’s thoughts and dialogue.

Inspired by the increasing idiocy, I’ve decided to embark on an exploration of this ridiculously secretive world of Pakistani sexuality. Ideally, I would like to compile all kinds of Pakistanis’ thoughts, beliefs, discoveries, fears, etc. I want to explore it within different demographics of the population, different regional ethnicities, socioeconomic classes, different age groups, different professions…

Unfortunately, I won’t be doing any such thing - since most people have refused to speak with me. So, I’ll make do with whatever I have access to. It isn’t much – but at least I have a handful of supportive people (which is more than anyone can expect, really).

The upcoming interviews aren’t a precise depiction of 'average' Pakistanis by any means, but it’s a start nonetheless.
Posted by Eiynah at 11:04 AM